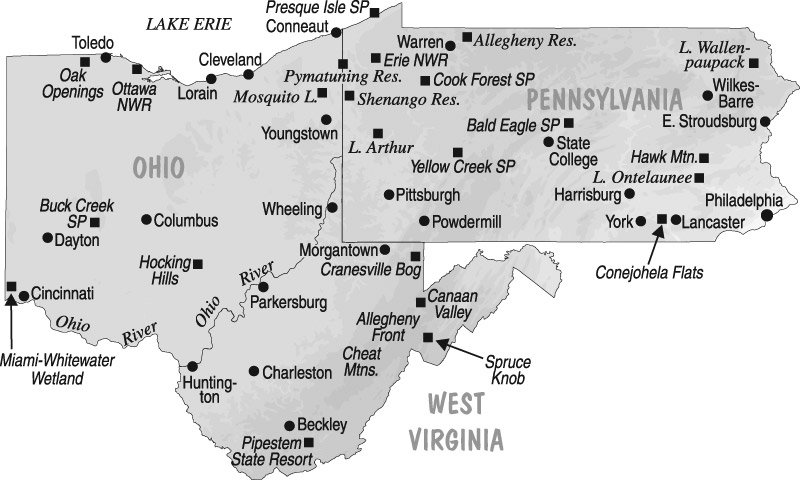 Pennsylvania represents the northeastern portion of the three-state North American Birds region known as the Eastern Highlands. The state’s varied geography and rich ornithological and birding tradition make it a fascinating place to study birdlife.

This large (116,000 square km) Commonwealth is divided into 8 physiographic regions as summarized in the seminal volume The Birds of Pennsylvania by McWilliams and Brauning. These regions form bands across the state that help guide our understanding of the status and distribution of the nearly 440+ species of birds documented across the state’s 67 counties. From southeast to northwest (generally), these regions are: Coastal Plain, Piedmont, Ridge and Valley, Glaciated Northeast, High Plateau, Southwest, Glaciated Northwest, and Lake Erie Shore. The core of Pennsylvania is covered by hardwood and mixed forests that host remarkable numbers of breeding birds, including dozens of species of Nearctic–Neotropical migrant songbirds. Though it lacks an immediate coastline, Pennsylvania’s position between the Great Lakes and Atlantic Coast contributes to its dynamic bird migrations. Major geographic features are important corridors for spring and fall migration. The Lake Erie Shore is one such leading line, especially for waterbirds and shorebirds, and Presque Isle is its focal point; the diagonal corrugation of the Ridge and Valley region helps funnel migrating raptors and songbirds past sites such as Hawk Mountain and Waggoner’s Gap; and rivers such as the Delaware and Susquehanna are avenues for waterbird migrants.

Over the past three centuries, Pennsylvania has been home to many pioneering ornithologists, artists, and conservationists like John James Audubon, Alexander Wilson, James Bond, Frank Gill, Ted Parker, Robert Ridgely, and Scott Weidensaul (to name a few), and the modern birding scene is both energetic and increasingly diverse. eBird is broadly embraced in Pennsylvania: more than 1.5 million checklists have been submitted by over 32,000 birders.

This region’s new regional compilers are working to draft a new and more comprehensive introduction to the region that includes Ohio and West Virginia. We hope to have that here soon.

The ABA gratefully acknowledges the contributions of Eastern Highlands & Ohio Regional Report Compilers Tom Johnson, Alex Eberts, and Aaron Graham to promoting knowledge and understanding about the birdlife of the continent.