On p. 72 of the Dec. 2022 issue of Birding, there appears a photograph, taken by Reinhard Geisler, of five terns standing or floating in shallow water at Stump Pass Beach State Park, Florida, on May 22, 2022. This photograph is a teaser for the article beginning on p. 50 of the same issue detailing the status and distribution in Florida of Thalasseus terns, specifically Elegant Tern and both American subspecies of Sandwich Terns, including the eurygnathus race known as Cayenne Tern. Editor Ted Floyd coined the term “large, crested, bright-billed tern” (LCBBT) complex, akin to the “large white-headed gull” (LWHG) complex in the genus Larus. While the tern complex does not contain as many species as the gull complex and therefore is not as confounding, the identification of Thalasseus terns nonetheless can be challenging. In addition to the normal variation in body size and coloration of bare parts such as bills and legs, identification can be hampered by continent-crossing vagrants that may breed with related species in both North America and in Europe, creating hybrids and back-crosses. 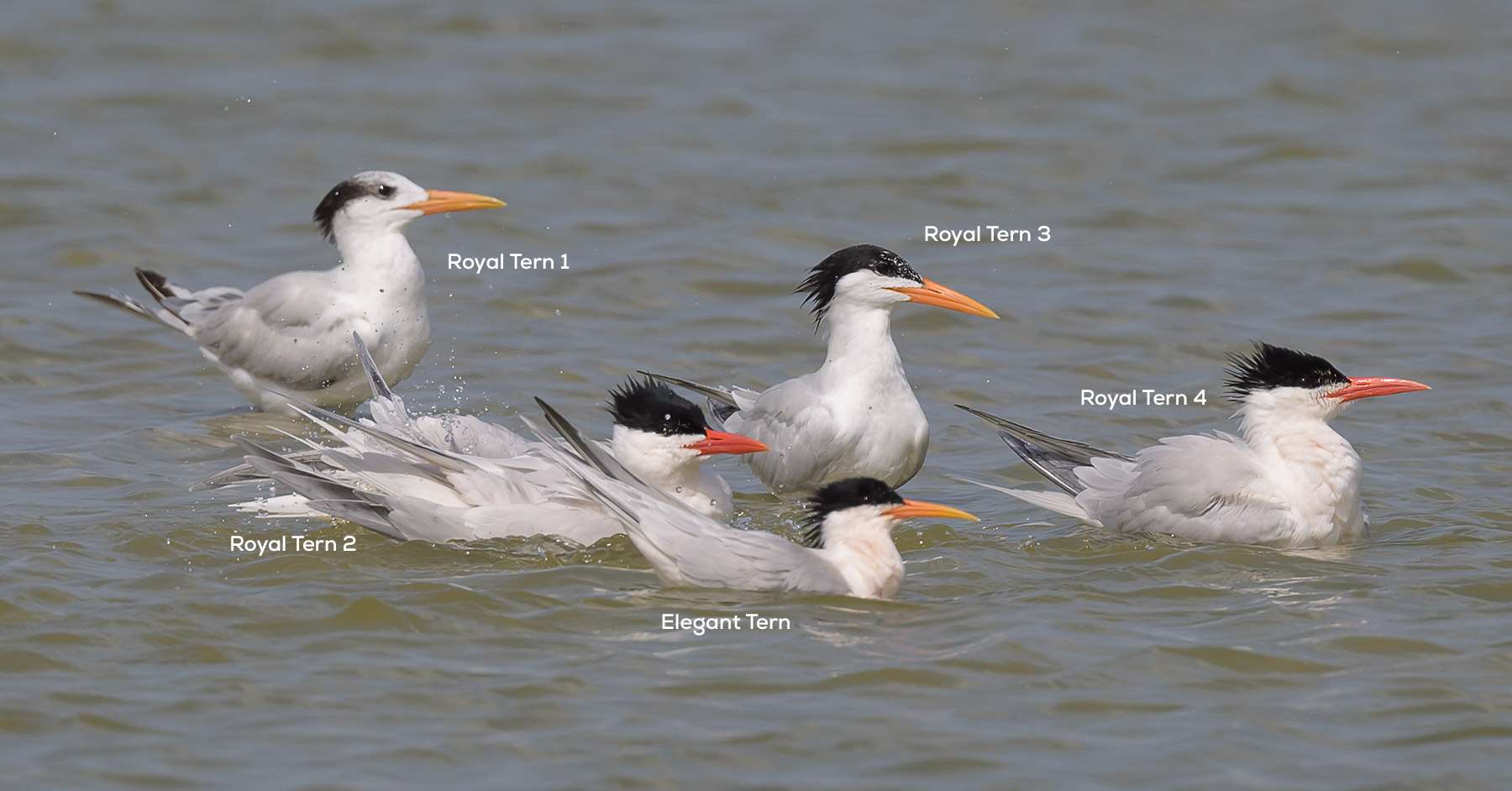 So, let’s consider these five terns. The tern in the center foreground is labeled an Elegant Tern, while the terns behind it are labeled Royal Terns. When I showed Reinhard’s photograph to my coauthors, John Groskopf and Valeri Ponzo, along with Don Fraser, another birding friend, there initially was disagreement among us as to the identities of some of the terns. We all agreed that the tern in the foreground was an Elegant Tern, which had been discovered earlier that day and lingered long enough for Reinhard and others to see and photograph it. Compared to the other terns, the Elegant is smaller with a proportionately longer, thinner bill, showing a noticeable droop to the tip. The bill is orange basally, shading to yellow-orange. The tern is an adult in alternate (breeding) plumage, showing a full black crown and forehead. The underparts show a pale pink blush.

Although the four of us eventually agreed that the four terns in the back row are all Royal Terns, we initially disagreed over the identities of two of them. We agreed that terns 1 and 3 from the left are Royal Terns with their mostly straight, stout, shortish orange bills with yellow tips. Both are adults, with tern 1 retaining basic (winter) plumage, while tern 3 is mostly in alternate (breeding) plumage. Terns 2 and 4 were initially problematic for us. Tern 2 is an adult in alternate plumage. The straight bill is orange–red and thick, and appears to be fairly short, although the tern is not perfectly in profile. With its reddish bill, this tern resembles a Caspian Tern, but the bill lacks the blackish tip that typifies that species. The bill also may be a bit thin for a Caspian Tern. The tern appears large, signifying that it is a male; its feathers are also fluffed out, perhaps adding to its large appearance. Tern 2, then, is an alternate-plumage Royal Tern with a bill that is redder and perhaps a tad thicker than is typical. Tern 4, in contrast, appears to have a smaller body, perhaps midway in size between the Elegant Tern and terns 1 and 3. Its bill appears to be the same thickness as that of the Royal Terns and is noticeably thicker than that of the Elegant Tern. The culmen appears to be strongly curved, but there is no droop to the tip. The bill is orange-red throughout, again intermediate in color between tern 2 on the one hand and terns 1 and 3 and the Elegant Tern on the other hand. With its black crown and forehead, it is in alternate plumage. Tern 4 too is a Royal Tern with a bill somewhat redder than is shown in field guides. (Indeed, Royal Terns in Figs. 1 and 6 of the article on pp. 50–60 also show reddish-orange bills, perhaps suggesting that bill color in the species may trend more toward red than is commonly known).

In conclusion, the four terns in the back row of Reinhard’s photograph all are larger than the Elegant Tern in front, and all have bills that are proportionately shorter and thicker. They are all Royal Terns that show variations in plumage, body size, and bill color and proportions. 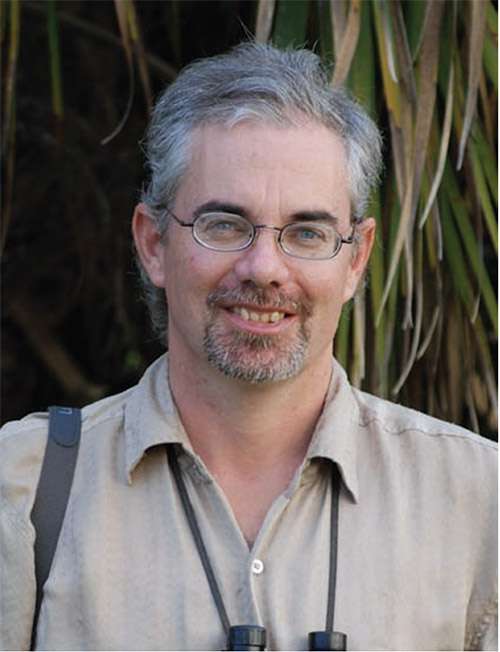 Research by Bill Pranty has added the Egyptian Goose, Purple Swamphen, Nanday Parakeet, and Common Myna to the ABA Checklist. Bill is former Chairman of the ABA Checklist Committee and a prolific writer, including authorship of six books. His list of non-captive birds photographed in Florida totals 511 species, most recently Kirtland’s Warbler.

Thanks for your discussion. I had questioned Tern #2 myself.

That Royal Tern 2 sure looks like a Caspian Tern to me.

I worked with these 4 species (CT, RT, ET, ST) in San Diego for my Master’s degree and RT 2 really looks like a Caspian.

RT2 looks Caspian to me as well. For one thing, I don’t think lack of a black tip to the bill rules out Caspian Tern!