A continuing Brant from fall was at Bar CCC Park and nearby locations in Parker, Douglas Co., 11 Nov–20 Jan (C. Phillips, m.ob.). Another was seen at Ketring Park and Lake and nearby locations in Arapahoe Co. 15–27 Feb (E. Wagner, D. Kibbe, m.ob.). A rare Barnacle Goose was picked out of the thousands of geese at Aurora Reservoir, Arapahoe Co, 9 Jan (SGM). Within the last decade, there have been at least 4 sightings of Eurasian Wigeon in the Cañon City area; one at Valco Pond in Cañon City, Fremont Co. 23 Dec– 6 Jan (R. Miller, m.ob.) was not a total surprise. With only 9 accepted records, a rare Common Gallinule was a nice find at Standley Lake, Jefferson Co. 9 Dec (ph. D. Baker). American Avocet, rare in winter, was recorded in 2 locations in La Plata Co. and Weld Co. 17– 30 Dec (D. White, R. Olson, m.ob.). Also rare in winter, a Long-billed Curlew was at Two Buttes Reservoir, Baca Co. 25 Jan (ph. DL). A Dunlin was located on the Loveland CBC, Larimer Co., 1– 2 Jan (CO, C. Sparks, m.ob.). A Long-billed Dowitcher was reported along the South Platte River in Adams Co. 28 Jan– 7 Feb (ph. G. Wiltse); this is one of only a handful of winter records for the state. For the 3rd consecutive year, an American Woodcock was seen at Bobcat Ridge Natural Area, Larimer Co., 14 Jan–25 Feb (M. Costello, m.ob.).

Acknowledgements: Many thanks to David Dowell for his central role in compiling sightings for the Colorado Birds Journal.

Photos–Colorado: Winter 2017-18
Hover or click on each image to read the caption. 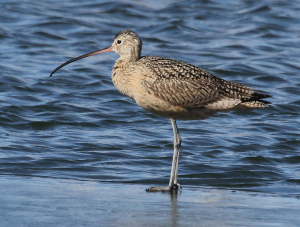 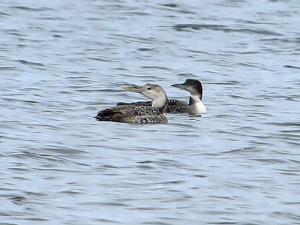 This Yellow-billed Loon, seen here with a Common Loon, was found and photographed on 13 Feb 2018 along the Gunnison River. It was Gunnison Co.’s 2nd; the previous record was 8 years prior. Photo by © Kathy Mihm Dunning. 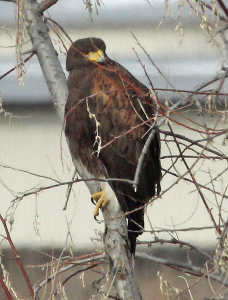 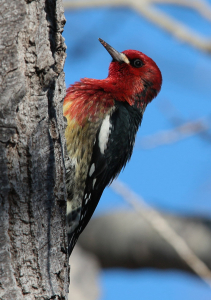 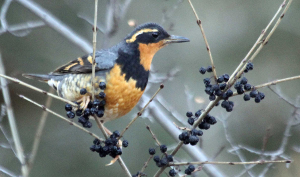 This Varied Thrush, one of many seen this season, was particularly photogenic for many birders during its stay near the Starsmore Discovery Center, El Paso Co. 1–28 Jan 2018. (Here 14 Jan 2018.) Photo by © Dave Leatherman. 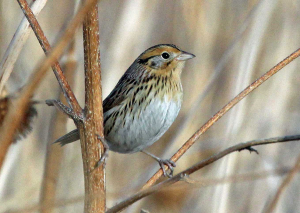 This LeConte’s Sparrow, rare in the state, was found and photographed at Van’s Grove, Bent Co. 13 Dec 2017; it was observed for the 2 days. Photo by © Dave Leatherman. 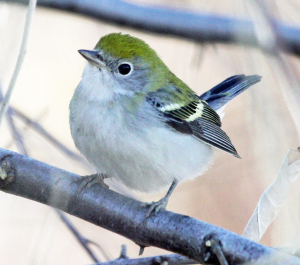 This Chestnut-sided Warbler, which continued from fall, lingered until 16 Dec 2017 in Pueblo, Pueblo Co. (Photographed here on 9 Dec 2017.) Photo by © Dave Leatherman. 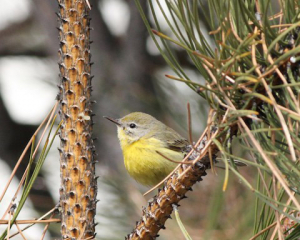 This Prairie Warbler was one of 2 reported this season. Found at a local apartment complex hotspot, the bird was observed from 16–20 Dec 2017 in Jefferson Co. (Here on 16 Dec 2017. Photo by © Aaron Shipe. 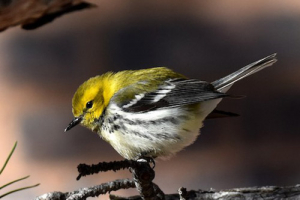