Temperatures for June and July were above average in the eastern portion of the state and much above average in the west. Although June was much drier than average, July precipitation averages were much above average especially in the se. quadrant. Throughout the season much of the state was out of drought, with only a few sections in the west in Abnormally Dry status. Birds not typically found in the western half of the state included Blue Jay, Broad-winged Hawk, Red-eyed Vireo, and Dickcissel. Rarities for the season included the state’s tenth White Ibis, Black-billed Cuckoo, Laughing Gull, Rivoli’s Hummingbird, Bay-breasted Warbler, and Pacific Wren.

Snow Goose was found twice this summer, with one at Soapstone Prairie N.A., Larimer 14–18  (N. Paprocki, R. Spaul, D. Ward) and one at Upper Queens/Neeskah Res., Kiowa 9 Jul (SW, SGM). Cackling Goose has been found in small numbers annually; one at Stearns Lake, Boulder 25 Jun (M. Hofeditz) and one at St. Vrain S.P. 30 Jul (SGM) were in line with that trend. Trumpeter Swans are rare in the summer; a continuing bird from spring was at Stagecoach Res., Routt through 31 Jul (K. Weeks, M. Ahlgren, m.ob.), and two more were found at Spring Park Res., Eagle 23 Jun (L. Miller, S. Foster). Very rare in the summer, two reports of Greater Scaup were great finds. Three were at Road Canyon Res., Hinsdale, 5 Jul (KMD) and four were at nearby Rito Hondo Res., Hinsdale 7 Jul (KMD). Seven reports of Common Goldeneye in as many counties were good 1 Jun–12 Jul, with the high count being five at Sands Lake S.W.A., Chaffee 1 Jun–30 Jul. This location has hosted multiples in consecutive years with no confirmed breeding records to date. Barrow’s Goldeneye reports came in from their breeding county of Clear Creek, as well as from Garfield and Larimer. Another at Sands Lake S.W.A., Chaffee 1 Jun–28 Jul was one of just two all-time records from the southern half of the state. The only other record this far south was one from Gunnison in 2012. Hooded Merganser has steadily increased its presence for a number of years now, going from a rare-but-regular summering species to having a confirmed breeding record and more possible. For two consecutive years now, one was found in the West Slope location of 18 Island Res., Jackson 29 Jul (SGM). This was a county first in 2016. A county first for 2017 was found at Elkhead Creek Res., Routt (D. Shoffner, C. Nunes), even further w. than the Jackson location. Time will tell if this species’ breeding range is expanding further into the state. The Colorado Breeding Bird Atlas II project has just one confirmed breeding record and three possible, after zero in Atlas I. (Wickersham 2016). Red-breasted Merganser is rare in the summer with no breeding records to date. Two reports were noted: one at Good Spring Creek Lake, Moffat 5 Jun (J. West, D. Trappett, J. Trappett) and one at MacFarlane Res., Jackson 29 Jul (SGM). Horned Grebe, also rare for the summer, was noted near the West Slope town of Tabernash, Grand 4 Jul (B. Dunn, A. Morris) and at Reuter-Hess Res., Douglas 1 Jun (T. Ryan). This location also hosted one throughout the summer season of 2015. Red-necked Grebe is rare in the state during the breeding season. Lake John in Jackson hosted a pair in 2014 that were observed building a nest and even got to the incubating state. No young were produced, and the species went absent in 2015 and 2016 at this location. Once again, one was discovered at Lake John, Jackson 1–2 Jun (B. Macurda, M. Kiessig, m.ob.), renewing hopes of future breeding attempts. Yellow-billed Cuckoo was noted twice on the West Slope, where it is rarer than in its usual locations in the e. portion of the state. One was near Paonia, Delta 3 Jun (J. Beason) and another at Hotchkiss, Delta 8 Jun (A. Robinsong). Rarer still, a Black-billed Cuckoo was documented at Tamarack Ranch S.W.A., Logan 2–4 Jun (GW, m.ob.), adding to two previous records at this location, dating back to 1992. Lesser Nighthawk continues to return to the sw. location of Nucla, Montrose, where one was seen 6–8 Jun (CD, B. Wright, J. St. Pierre). With only a handful of summer records, a Rivoli’s Hummingbird was a great find at Golden Gate Canyon S.P., Gilpin 25 Jul (SGM). Also, rare, but occurring more frequently, a Ruby-throated Hummingbird was at Tamarack Ranch S.W.A., Logan 28 Jun (L. Kilpatrick). Black Rail was found at its usual locations in Bent, Otero, Prowers, and Pueblo 2 Jun–22 Jul. Birds found outside of this range require documentation for the review committee. One such bird fit this bill at Lower Latham Res., Weld 6 Jun (SGM).

The only Black-bellied Plover of the season was one at Sheridan Lake, Kiowa 10–17 Jun (SGM, m.ob.). Snowy Plovers showed up outside their normal breeding locations of the se. quadrant. One, then three were seen at Union Res., Weld 11 May–10 Jun (M. Chavez, KMD, T. Leukering, m.ob.). One adult and two chicks were in noted in ne. Morgan 25 Jun (ph. DD, KMD). This is a first county breeding record. Other reports from Alamosa, Bent, and Kiowa 4 Jun–22 Jul were more typical. Long-billed Curlew was seen in a few atypical locations, including two at Brewster’s Ridge, Mesa 7–22 Jun (B. Carper, D. Swain), a county first at Rio Blanco S.W.A., Rio Blanco 1 Jul (H. D. Chapman), and another at Antero Res., Park 24 Jul (D. Suddjian). White-rumped Sandpiper typically occurs in the e. portion of the state throughout June in small numbers. Two at Smith Res., Costilla 2 Jun were the first seen since originally being discovered at this location back in 2011. These are the only two records for this county to date. Three Wilson’s Phalarope were at the unusually high elevation of 10,000 feet on Grand Mesa, Mesa 20 Jul (D. Price). Laughing Gull is rare, but typically annual. One immature at Upper Queens Res., Kiowa 9–15 Jul (SGM, SW) was the only report for the season. Herring Gull was noted at three sites in Weld, Park, and Kiowa 25 Jun–15 Jul. Lesser Black-backed Gull was found even less than Herring Gull; usually the opposite is true. Still, as many as four were at Windsor Lake, Weld 20 Jun–3 Jul (SGM). A county first Caspian Tern was near Craig, Moffat (JL). More typical sightings occurred in Kiowa and Weld 10 Jun–11 Jul. Rare for the county, an American Bittern was at Toponas, Routt 4 Jul (FL). Least Bittern had a good showing this year with four reports in the two counties of Bent and Prowers 3–10 Jun. With only nine accepted records to date, a White Ibis at Lowell Ponds, Adams 18 Jun–4 Jul (ph. Z. Schiff, m.ob.) was the longest staying record to date, affording many local birders an opportunity to view the rarity. A Broad-winged Hawk was at Loudy-Simpson Nature Trail near Craig, Moffat 30 May–2 Jun (JL), very rare for the West Slope. Rare for summer, a Merlin was in Cañon City, Fremont 9 Jun (R. Miller) and also at Fountain Creek Regional Trail, El Paso 4 Jul (T. Britton). Only one confirmed breeding record exists for Scissor-tailed Flycatcher, so a report of two near Campo, Baca 17 Jun–4 Jul (JK et al.) was of interest. Another near Monte Vista, Rio Grande 1 Jul (V. Simmons) appears to be the third county record. A singing White-eyed Vireo was documented in Pueblo, Pueblo 2 Jun (vr. VT). Bell’s Vireo has become annual at the location of Valco Ponds S.W.A., Pueblo 3 Jun–29 Jul (BKP), another was at Van’s Grove, Bent 1 Jun (VT). Other more typical sightings occurred in Logan and Yuma 3 Jun–29 Jul. Rare for the West Slope, a Red-eyed Vireo was at Millner, Routt 27 Jun (FL). Blue Jays have been expanding their range further w. in recent years, even touching the West Slope. One of very few records this far west was one near Craig, Moffat 23 Jun–24 Jul (JL). First reported at this location in 2015, and again in 2016; two Pacific Wrens were detected in the Wild Basin Area of Rocky Mountain N.P., Boulder 1–31 Jul (SGM, KMD, m.ob.). Carolina Wren was noted in four locations, continuing from the previous season through summer. Adding to just four reports in the last five years, a Wood Thrush was at Lory S.P., Larimer 14–15 Jun (T. Guida, N. Komar, D. Wade). Thinly distributed White-winged Crossbills were noted in three locations: one at Black Mountain, Moffat 3 Jul (SGM), one at Hoosier Pass, Summit 4 Jul (J. Socolar, B. Bruninga-Socolar), and another at Mount Sneffels, Ouray 31 Jul (J. Wilder).

Clay-colored Sparrow was reported twice: one near Boulder, Boulder 25 Jun (S. Severs) and one at Prewitt Res., Washington 16 Jul (SGM). Lark Bunting was found in the high country and further w. than expected: one near Frisco, Summit 5 Jul (K. Ecton), one at 10,500 ft. elevation in Eagle 16 Jul (V. Remsen, S. Larson), five near Gypsum, Eagle 23–24 Jul (T. and K. McConnell), one at Antero Res., Park 24 Jul (D. Suddjian), one at Heckendork S.W.A., Chaffee 30 Jul (R. Schmidt), and three at Clear Creek Res., Chaffee 31 Jul (D. Kibbe, M. Goldthwait). Baird’s Sparrow was seen with as many as six at Soapstone Prairie N.A, Larimer 15 May–23 Jul (WW, m.ob.) and as many as six at Meadow Springs Ranch, Weld 26 May–18 Jul (E. Youngberg, WW). For up to two years now, birds have been found in one or both of these locations. Field workers having been closely monitoring the birds. Time will tell if this species is indeed breeding in Colorado. Out of place warblers this season included Black-and-white Warbler, Hooded Warbler, Northern Parula, Bay-breasted Warbler, and perhaps another soon to be confirmed breeder, Yellow-throated Warbler. The Black-and-white Warbler was near Greenwood, Custer 4 June (DD). Hooded Warbler was noted twice: one at Chico Basin Ranch, Pueblo/El Paso 15 Jun (C. Hundertmark, P. Slingsby) and another at Lair O’ the Bear Park, Jefferson 17 Jun (L. Chittum). Bay-breasted Warbler was sw. of Westcliffe, Custer 27 Jun (D. Rudin). A singing Yellow-throated Warbler was observed in spring and continued through the summer in Pueblo, Pueblo (VT, m.ob.).

As many as three Summer Tanagers were reported at Cottonwood Canyon, Baca/Las Animas 4 Jun–24 Jul (JK et al.). Another was at Yellowjacket Canyon, Montezuma 11–16 Jun (GW et al.). For a few years now, a male Northern Cardinal has roamed the streets of Boulder, Boulder, seen again 1–13 Jun (P. Thorpe, m.ob.). Other unexpected sightings of singles occurred in Trinidad S.P., Las Animas 23 Jun (H. Barnes) and at JE Canyon Ranch, Las Animas 23 Jun (J. Harlan). Expected sightings continue to occur in Logan, Prowers, and Yuma 2 Jun–15 Jul. Painted Bunting continued at Picture Canyon, Baca through 4 Jul (W. Kaempfer et al.). Another was seen at Cottonwood Canyon, Baca 21 Jun (T. Mitzen, L. Purifoy). Dickcissel continued to increase in frequency and in numbers across the state. Following a trend set in recent years. Of note was one from the West Slope location of Deerlodge Park C.G., Baca from the previous season to 4 Jul (KMD). A high count of 55 was noted at Tamarack Ranch S.W.A., Logan 25 (KMD, DD). Many other reports from over 30 counties occurred throughout the season.

Acknowledgments: Many thanks to David Dowell for his central role in compiling sightings for the Colorado Birds Journal. 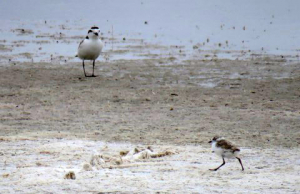 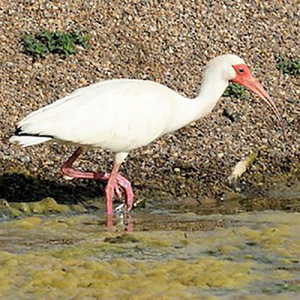 With only nine accepted Colorado records to date, a White Ibis was seen at Lowell Ponds in Adams Co from 18 Jun to 4 Jul 2017 (here 22 Jun). This was the longest stay of the species to date, and afforded many birders an opportunity to view the rarity. Photo © Ryan Claar.