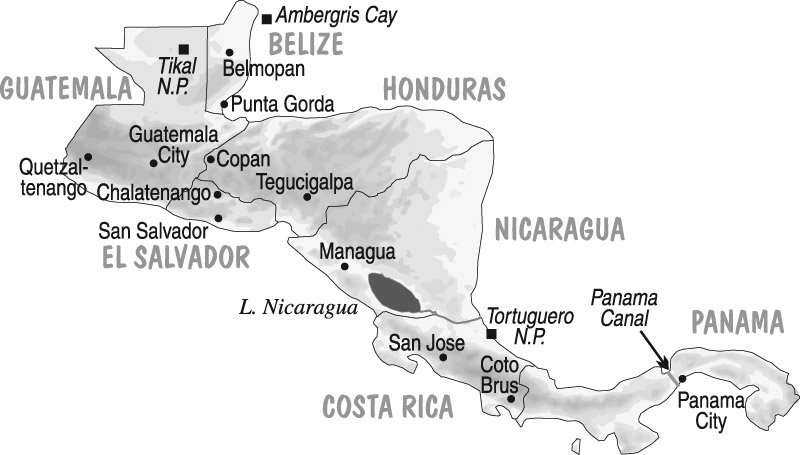 Quite unexpected, and new not only for El Salvador but for all of Central America, was a second-cycle male Surf Scoter at a freshwater lagoon about 10 km inland near the international airport in La Paz Dpt. It was found 13 Jan 2017 and remained for at least four days (ph. Melvin Bonilla, ph. Edwin Calderon, multiple observers). This is the southernmost report ever for Surf Scoter. A group of 10 Eared Grebes on Lake Ilopango, San Salvador Dpt. was an excellent find on 17 Feb 2017 (Ricardo Ibarra, Guillermo Funes, Néstor Herrera). The previous report of this species in El Salvador dates back to 1997, when a group of 17 was seen on the Laguna de Chanmico. Rather expected given the ongoing range expansion into Central America, a Eurasian Collared-Dove found on the Salvadoran side of the border with Honduras at El Amatillo, La Unión Dpt., on 30 Dec 2016 was a first for El Salvador (Nick Komar).

An adult male Ruby-topaz Hummingbird was seen close to Yaviza, Darién Prov. on 21 Jan 2017 (ph. Euclides Campos). The species is rare in Panama, apparently dispersing seasonally from South America. Glow-throated Hummingbird is a rare Panama endemic known mainly from the Serranía de Tabasará of central Veraguas and eastern Chiriquí. At least 5 individuals were seen between 1175–1266 m elevation in cloud forest in Cerro Hoya National Park in the southwestern Azuero Peninsula, Veraguas Prov. on 8 and 9 Feb 2017 (Kees Groenendijk, Howard Laidlaw, ph. Jaap Kalkman). The raspberry gorget of the male confirmed it as this species rather than the similar Scintillant Hummingbird. These are the first records from the area since the species was first reported there in 1994. A Violet-headed Hummingbird was a surprise find and indeed a first for well-birded Belize on 29 Dec 2016, when one was at the Moonracer Farm in Cayo Dist. (Bob Chapman, Lee Jones). No photos were obtained, but extensive field notes leave little doubt as to the identification. This record is about 150 km northwest of the species’s known range. Although not far from the border with Nicaragua, the second Blue-vented Hummingbird for Honduras was an interesting find on 8 Jan 2017, especially since it was in the Caribbean Moskitia, near the town of Rus Rus, Gracias a Dios Dpt. (John van Dort, ph. Jonathan Hernández). In the same area, near Rus Rus, six Black Rails at a single location was a high count for Honduras on 8 Jan 2017 (John van Dort, multiple observers); there seems to be a healthy local population in the marshes and wet savannas there. Belize’s fourth and fifth accepted records of Yellow-breasted Crake came one day apart on 14 and 15 Feb 2017; the first was at a small pond in the savanna near Lamanai Outpost Lodge, Orange Walk Dist. (ph. Eduardo Ruano), and the second was 7.5 km to the northeast at Crooked Tree Wildlife Sanctuary, Belize Dist. (Roni Martinez).

Two Southern Lapwings observed at the El Jocotal lagoon, San Miguel Dpt. in eastern El Salvador on 16 Jan 2017 (Enrique Choussy, ph. Alvaro Moises) provided the second record of this species for that country. While the two American jaçana species occasionally wander into each other’s ranges in Panama, hybrids are rarely reported. A hybrid Northern x Wattled Jaçana observed on 30 Jan 2017 in the Chiriquí Grande area in Bocas del Toro was thus noteworthy (ph. Ramón Fernández Francés, Natalia Decastro González). Following Belize’s fourth record of Dunlin last fall, three were seen 13 Feb 2017 at Gra Gra Lagoon in Dangriga, Stann Creek Dist. (ph. Isael Mai, Philip Balderamos, Ivar Marchand, Eddie Polanco, Tiffany Young). California Gull, until recently exceedingly rare anywhere in the region, is now practically annual on the Pacific coast of Central America. One was present at Punta Ratón in the Honduran department of Choluteca on 7 Jan 2017 (Alfonso Auerbach, ph. Roselvy Juárez). Forster’s Tern is rare in Panama; one was seen at the mouth of the Changuinola River, Bocas del Toro Prov., on 3 Feb 2017 (Natalia Decastro González, Glenn Crawford, ph. Brooke Miller). An adult Black Noddy in the Gulf of Montijo on 4 Dec 2016 (ph. Jan Cubilla, Kees Groenendijk, Alfred Raab, Howard Laidlaw, Mikko Oivukka, Rolando Jordan) was the first confirmed record of the species for Panama. A count of 2,559 Black Skimmers at a high tide roost at the mouth of the Choluteca River in Choluteca Dept.,Honduras was noteworthy on 10 Feb 2017 (John van Dort, Roselvy Juárez); it represents one of the largest concentrations of this species reported in Central America. Two Cory’s Shearwaters were observed Christmas Day 2016 on Half Moon Caye off the coast of Belize; one died from exhaustion and frigatebird attacks later in the day (Israel Manzanero Jr). The species had been expected again in the region since it was found on the Caribbean coast of Costa Rica in March 2003. A first for Nicaragua, a Burrowing Owl was found on the access road to the Miraflor reserve in Estelí Dpt. on 16 Dec 2016 (Chico Muñoz). Nicaragua was the last country in the region to add this rare winter visitor to its bird list.

Black-throated Wren reaches the northern limit of its distribution in the Honduran Moskitia, where it is rare and local. The aforementioned expedition to the mythical White City archaeological site in the Río Plátano Biosphere Reserve found this species to be locally common along the edges of a tributary river of the Río Plátano, Gracias a Dios Dpt., where it was observed on most days between 16–24 Feb 2017 (ph. Carlos Funes, v.r. John van Dort). A Hermit Thrush, Belize’s third, was closely observed 18 Jan 2017 at Hidden Valley Inn in the Mountain Pine Ridge, Cayo Dist. (Roni Martinez). A Lark Sparrow at the Zamorano University horse farm, Francisco Morazán Dpt., on 6 Feb 2017 was only the third record for Honduras of this very rare winter visitor (ph. Oliver Komar). Hermit Warbler is a rare migrant to western Panama; an adult male was seen above Boquete, Chiriquí Prov. on 4 Jan 2017 (Dave Klauber). Also in Panama, an adult Prairie Warbler was a great find at the former Ft. Davis, Colón Prov., on 2 Jan 2017 (Rosabel Miró, Karl Kaufmann). 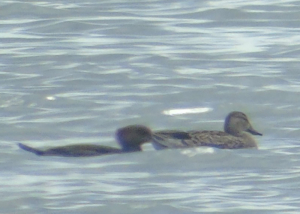 It took a quarter century after Belize recorded its first Hooded Merganser for another one to turn up. This female or young male was discovered on 1 December 2016 at Paradise Shrimp Farm in Stann Creek District. Photo © Roni Martinez. 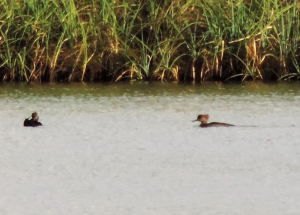 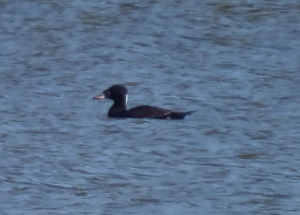 New for Central America was this male Surf Scoter in second basic plumage, which was present at a small inland body of water in El Salvador for at least four days (here, 13 Jan 2017), providing the southernmost known record for the species. Photo © Melvin Bonilla. 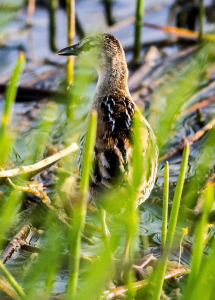 This cooperative Yellow-breasted Crake was found 18 February 2017 at the edge of a small pond in the wet savanna that abuts the New River southeast of Lamanai Outpost Lodge in northern Belize. It represents the 4th accepted record for Belize and the 2nd to be photographed. Photo © Eduardo Ruano. 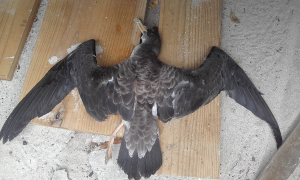 Representing the first record for Belize, this Cory’s Shearwater, one of two fatigued birds found Christmas Day, 25 December 2016, on the beach at Lighthouse Reef’s Half Moon Caye, was attacked and killed by frigatebirds. Its companion survived and was last seen flying out to sea after seen circling above the deceased individual. Photo © Israel Manzanero, Jr. 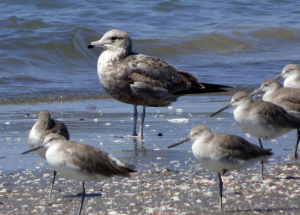 California Gulls have become almost annual in recent years in Honduras. This one was found on 7 Jan 2017 at Punta Ratón in the Honduran department of Choluteca. Photo @ Roselvy Juárez. 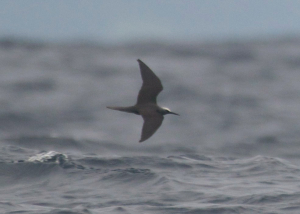 This was the first photographic record, and first confirmed record of Black Noddy for Panama, found on the Pacific side in the Gulf of Montijo, 4 Dec 2016. Photo © Jan Cubilla. 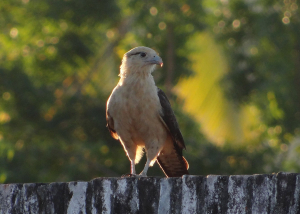 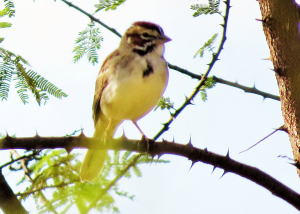 This Lark Sparrow at Zamorano University on 6 Feb 2017 was just the third reported for Honduras; the species is very rare anywhere in Central America in winter. Photo © Oliver Komar.