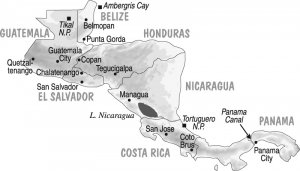 New for Guatemala was a White-crowned Pigeon observed on 6 Mar in Tapon Creek, Izabal Dpt. (Miguel Ramirez, Alexis Cerezo, Joel Such). Even more surprising was Guatemala’s second, and first inland, White-crowned Pigeon a few weeks later, on 8 Apr at Caserío Yaxha, Petén Dpt. (ph. Geremias Gonzales). An Inca Dove seen perched on a utility line along the highway at Running W Farm, Cayo Dpt. on 14 Mar (Michael O’Brien, Louise Zemaitis) was only the third to be documented for Belize. It or another individual was seen nearby on 21 Apr (Roni Martinez). Dwarf Cuckoo, not uncommon just outside the region in Colombia, is scarce in eastern Panama. One found along the Río Tortí, Panamá Prov. on 28 Mar provided the second photo-documented record for Panama (ph. Colin Dillingham, Angela Dillingham). By far the most unexpected bird of the season was a South American vagrant, Dark-billed Cuckoo, that surprised a group exploring Nicaragua’s Río Indio, Atlántico Sur Autonomous Region, on 28 Apr (ph. Daniel Martínez). This species has been recorded just once previously in Central America (in Panama). A dusk chorus of three Spot-tailed Nightjars on 28 May at Santa Cruz de Yojoa, Cortés Dpt. was noteworthy for Honduras (v. r. Oliver Komar, Damian Magario, Abiel Martínez Hernández, William Orellana, Romel Romero). A predawn chorus of eight Buff-collared Nightjars on 6 May at the Reserva Natural Heloderma, Zacapa Dpt. provided a high count for Guatemala and all of Central America (Marshall Illiff). Another surprise during the aforementioned Río Indio expedition was a Yellow-breasted Crake; another first for Nicaragua, it was found on 26 Apr (ph. Daniel Martínez).

A count of six Long-billed Curlews at Tecojate, Escuintla Dpt. on 19 Apr (Lester de León Lux, Josué de León Lux) was exceptional for Guatemala and for anywhere in Central America. A Hudsonian Godwit seen and photographed on 19 May in a salt production complex near Marcovia, Choluteca Dpt. was a first for Honduras (ph. John van Dort). This long-distance migrant drops down somewhere in Central America virtually every year, and thus was expected. Remarkable for Belize were 750 Franklin’s Gulls migrating high over the interior at the Blue Creek rice fields, Orange Walk Dist. 13 May (Andrew Farnsworth, ph. Steve Kelling, Roni Martinez, Brian Sullivan). A California Gull at Barra de Santiago, Ahuachapán Dpt. on 3 Apr (ph. Julio Acosta, Leticia Andino, ph. Guillermo Funes, Oliver Komar, María Oviedo, Benjamín Rivera) is the fifth record for El Salvador, and given the plethora of Pacific coast records of this species in recent years, more are expected soon! This observation is significant for being assigned to a subspecies. Size comparisons with Laughing Gulls and the molt stage of wing coverts permitted this bird to be assigned to the northern subspecies albertaensis, which breeds in western Canada. Well-documented was a third-cycle Herring x Kelp Gull hybrid, or “Chandeleur Gull”, on the El Salvador coast at Barra de Santiago; it was found for the last time 15 Apr (ph. Enrique Choussy) after a 10-month visit (see Fall 2016 regional report and the photo section below for more details). These hybrids were first discovered at nesting colonies on the Chandeleur Islands off Louisiana a few decades ago. Completely unexpected for the Caribbean coast of Nicaragua was another long-distance migrant, an Arctic Tern, at the mouth of the Río San Juan on 25 Apr (ph. Daniel Martínez); although large numbers migrate past Central America twice a year, most pass far out to sea on the Pacific side, and this bird provided just the second record for the country. Rare in Panama Bay, a Brown Noddy was found sitting on the mudflats at Panamá Viejo in Panama City on 12 May (ph. Osvaldo Quintero).

Long-expected in the Pacific off of Nicaragua, both Red-billed Tropicbird and Nazca Booby were reported on 10 Apr by birders on cruise ships (Marie Cecile Lee, Kathryn Clouston). Continuing near Gorgona, Panamá Prov. were three Whistling Herons seen courting on 8 Apr (ph. Jan Cubilla). A pair has been found in this general area off and on since the summer of 2014. Noteworthy even for Belize were two American Bitterns on 21 Mar at Crooked Tree Wildlife Sanctuary, Orange Walk District (ph. Jes Christian Bech). A huge find, especially for northwest Costa Rica, was a Harpy Eagle which posed for John Garrett (ph.) and Amanda Savage at the Río Las Haciendas, Alajuela Prov. on 30 May.

Yellow-headed Blackbird is regular in much of Mexico but becomes rare south of the Isthmus of Tehuantepec and extremely rare anywhere in Central America. One seen in Paso Caballos, Petén Dpt. on 15 Mar provided a first record for Guatemala (Luis Garma). Exceptional for El Salvador, five Giant Cowbirds visited an oropendola colony at Parque Ecológico El Manzano, Chalatenango Dpt. on 9 Apr (ph. Edwin Calderón, Alejandro Calderón). A Swainson’s Warbler was an exciting mist-netting capture in the Bosawás National Park on 22 Mar; it provided a first for Nicaragua (ph. Heydi Herrera). Far rarer for the region was a Connecticut Warbler grounded on Belize’s Half Moon Caye on 24 Apr (Israel Manzanero, Jr.). Although still not documented with photos or specimens for northern Central America, the description of this warbler walking (not hopping) on the beach was convincing. 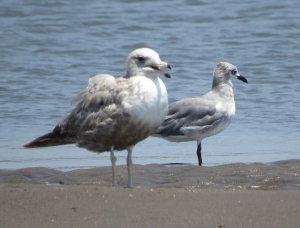 This California Gull, a fifth country record for El Salvador, was photographed 3 Apr 2017 at Barra de Santiago, Ahuachapán Dpt., El Salvador. It is the first Central American record of the species to be assigned, based on its large size and molt timing, to the northern subspecies albertaensis. The bird in the background is a Laughing Gull. Photo © Oliver Komar. 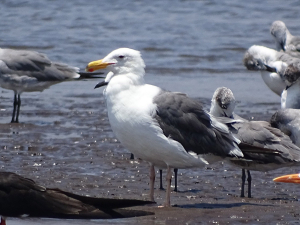 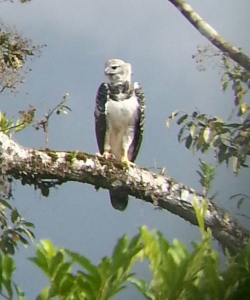 Even a digi-binned image of a Harpy Eagle is worth publishing, especially when it was in northwest Costa Rica, where the species is now virtually never seen. This adult (or perhaps subadult) was documented 30 May 2017 at Río Las Haciendas, a biological study site just south of the Nicaraguan border in Alajuela. Photo © John Garrett. 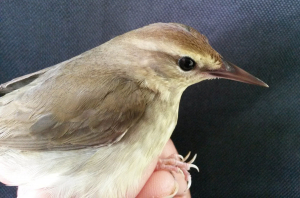