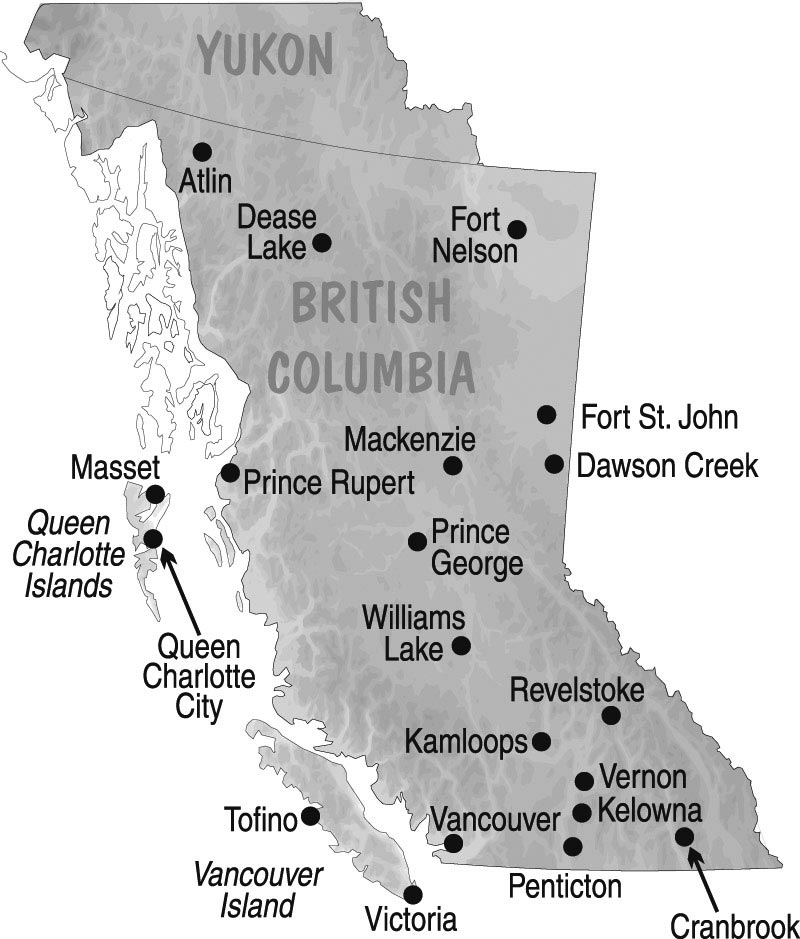 An upper ridge began building offshore by mid-March, gaining strength through April. The resulting cool, dry northerly flow led to depressed temperatures and precipitation, although stations east of the Rockies picked up some new snow the latter half of March. Interior valley snowpacks were late melting, mostly gone by the third week of April. The ridge broke down early in May allowing the westerlies to resume, especially over the southern half of the region which saw the greatest precipitation. Temperatures were near normal for the month.

The only report of a Ross’s Goose in the province during this period was of a single bird in fields along Larson Road in Vanderhoof, 19 Apr (JGa). In Burnaby, a male Tufted Duck was at Piper Spit at Burnaby Lake, 23 Mar–15 Apr (TG, m. ob). A female Long-tailed Duck successfully wintered at College Oxbow in Castlegar, until at least 19 Apr (CS, m. ob). Rare anywhere in British Columbia, apart from Shuswap Lake where small numbers often breed, a Clark’s Grebe was at West Beach in White Rock, 28 Apr (IP, m. ob.). Another Clark’s Grebe was seen from the Maude Roxby Bird Sanctuary in Kelowna, on Okanagan Lake, 17 May (DBe, m. ob.).  Calliope Hummingbird is rare in coastal sections of the province, where a male showed up at Ambleside Park in West Vancouver, 2 May (RL). Another Calliope Hummingbird was on the Sunshine Coast, at a private residence in Gibsons, 1 May (EH). Yellow Rail is unusual in British Columbia, outside of the Peace River area, so one photographed along Matthew Creek in Kimberley, in the East Kootenay, 24 May, was noteworthy (DD).

An American Avocet, rare on Vancouver Island, was seen at the Courtenay Airpark in Courtenay, 23 May (CP, m. ob.). In the Peace River area, where American Avocet is also a rarity, four were along 255 Road near Fort St. John, 7 May (ChC). On Vancouver Island’s west coast, a Snowy Plover was a great find at Comber’s Beach near Tofino, 26 May (AD, IC). A rare migrant in the Southern Interior of British Columbia, a Whimbrel was along the shore of Upper Arrow Lake, at the mouth of Burton Creek, near Nakusp, 17 May (CM, et al.). A Marbled Godwit found along the shore of Osoyoos Lake at the Highway 3 bridge in Osoyoos, 4 May, is one of just a few records of this species for the Okanagan Valley. Near Prince George, at Eaglet Lake, a Marbled Godwit was also a great sighting, 10 May (SK). A Hudsonian Godwit was also found near Prince George, in a flooded field at Giscome, 25 Apr (EW). A somewhat rare spring migrant in the Southern Interior of the province, a Sanderling was at the mouth of Mission Creek in Kelowna, 18–20 May (LL, m. ob.).  Also, a rare spring migrant in the Southern Interior, a Short-billed Dowitcher was at Robert Lake in Kelowna, 25 May (NS). A Willet continued from the winter period at Boundary Bay between the foot of 88th Street and the foot of 104th Street, until at least 11 Apr (IP, m. ob.).

Parasitic Jaegers are rare spring migrants in the interior of the province, where a light morph adult was found flying low over Okanagan Lake at Rotary Marsh in Kelowna, 31 May (DBe). Perhaps the same bird, but maybe a different jaeger was seen later in the day on 31 May, flying south over Okanagan Lake at Seclusion Bay near Peachland (CC). Reports of Sabine’s Gulls came from a variety of areas. One was seen along the Coquihalla River at Thacker Park in Hope, 21 May (GG). A non-breeding plumage adult was at the mouth of Mission Creek in Kelowna, 20–23 May (DG, DBe, m. ob.). In the East Kootenay area, a Sabine’s Gull was at Jimsmith Lake Provincial Park near Cranbrook, 26 May (JT). In northeastern British Columbia, a Sabine’s Gull was at the south end of Charlie Lake near Fort St. John, 20 May (EP). Most intriguing, however, was a flock of 54 Sabine’s Gulls seen from Maplewood Flats in North Vancouver, 22 May (RL, m. ob.). Just one Lesser Black-backed Gull was reported in the province during the spring. The bird, an adult, was found on the beach on Tla’amin Nation Reserve lands in Powell River, 25 Apr (IV). Lesser Black-backed Gulls, when they do show up in British Columbia, tend to appear on larger lakes in the Southern Interior, so this bird, which provides a first record for the Sunshine Coast, is noteworthy. An adult Slaty-backed Gull was photographed on the east side of Vancouver Island at Royston, 7 May (LS).

Yellow-billed Loons, while not particularly rare along the coast of Vancouver Island, were noted at several locations. All sightings were of single birds, with one at the Trent River Estuary in Royston, 6 Mar (DB). Another was seen from Hardy Bay Road in Port Hardy, 20–21 Mar (GM). A Yellow-billed Loon was at Miracle Beach Provincial Park, at Black Creek, on Vancouver Island, 24–27 Mar (BDu, m. ob.), and an immature was found at Salmon Point in Campbell River, 8 Apr (GSt). Reports of single Great Egrets came in from several coastal locations. One was at Iona Beach in Richmond, 29 May (WD, m. ob.), and another was at Blackie Spit in Surrey, 26–28 May (MG, m. ob.). A Great Egret was on Vancouver Island at Nanaimo, in a marshy area at the Living Forest Campground, 1–2 May (DBI). Also on Vancouver Island, a Great Egret was at Oyster Bay in Campbell River, 9–11 May (SM, m. ob.). An out-of-range adult Black-crowned Night-Heron was found at Scout Island in Williams Lake, 30 May (PR).

An out-of-range male Yellow-bellied Sapsucker was a nice find in Vancouver’s Stanley Park, at Third Beach, 16–18 Mar (NV, m. ob.). Another male Yellow-bellied Sapsucker was at a private residence in Coquitlam, 20 Apr (MS). Normally not found in coastal areas, a male Red-naped Sapsucker was found at Cecil Green Park in Vancouver, 21 Apr (KR, m. ob.). In Richmond, a male Red-naped Sapsucker was at Garden City Park, 18 Apr (MH, IP, m. ob.). Lewis’s Woodpeckers are generally considered rare visitors to coastal locations in the province. A Lewis’s Woodpecker flew overhead at the East Beach mudflats, near the Dollarton Highway in North Vancouver, 3 May (RL). In Pemberton, a Lewis’s Woodpecker was noted along Pemberton Meadows Road, 7 May (TE). An immature Gyrfalcon was seen along Fadden Road in Abbotsford, 9 Mar (RN), and a report, also of an immature bird in Abbotsford along Vye Road, 7 Mar, could involve the same bird (GG, m. ob.).

A Clark’s Nutcracker, a bird that rarely strays to coastal locations in British Columbia, was at Mount Tuam on Salt Spring Island, 5 Apr (RB). Single Blue Jays appeared in Surrey and on Vancouver Island at Saanich. The Surrey bird was found at Boundary Park, 22 Mar (fide CG).In Saanich, a Blue Jay remained from the winter period until at least 14 Apr (BSt, m. ob.). Rare in coastal areas, a Black-billed Magpie was along Churchill Street near the North 40 Dog Park in Delta, 23 Apr (ABo, m. ob.). Also in Delta, and on the same day, another magpie was found at Centennial Beach, 23 Apr (DU, m. ob.). In Vancouver, a Black-billed Magpie was at Prospect Point in Stanley Park, 30 Apr–9 May (MT, m. ob.). Another Black-billed Magpie most likely did some island hopping before it landed on Galiano Island, at a private residence, 18 Apr (MHo). A female Western Bluebird in an abandoned vineyard on Columbia Valley Road near Chilliwack, 6 Apr, was a nice find as this species is rare away from the Southern Interior (JV, EK, m. ob.).

Single Vesper Sparrows, a noteworthy species on Vancouver Island, were at Uplands Park in Oak Bay in Victoria, 12 May (GN), and at McIntyre Reservoir, at Martindale Flats in Central Saanich, 12 May (MM). At Longview Farms Bulb Fields in Saanich, a Vesper Sparrow was present, 26 May (RG, MO). On the west coast of Vancouver Island, a Vesper Sparrow was a nice discovery at Ucluelet, 23 May (IC). In Nelson, a Lark Sparrow was found along the Taghum foreshore, where the bird remained from 19–21 May (GS). Better yet, a LeConte’s Sparrow was found at Kokanee Creek Provincial Park, near Nelson, 18 May (GS, m. ob.). Lingering Harris’s Sparrows were noted at several locations. One bird, an immature, was at a private residence in Lumby, 22–23 Apr (ST, et al.). An adult Harris’s Sparrow was at a private garden along 11th Avenue South in Cranbrook, 30 Apr (WR). On Vancouver Island, a Harris’s Sparrow was at the Cedar Hill Golf Course in Saanich, 12–16 Mar (KE, m. ob.). Rare on Vancouver Island, a Yellow-breasted Chat was at Blenkinsop Lake in Saanich, 21–27 May (MM, m. ob.). In the East Kootenays, a male Baltimore Oriole was at Fairmont Hot Springs, 30 May (DGi). A male Black-and-white Warbler was north of Brackendale, along railway tracks, near the Squamish River, 4–6 May (CD, m. ob.). At the Richmond Nature Park in Richmond, a male Black-and-white Warbler was seen, 5 May (LB).

One of the best sightings of the spring was a male Prothonotary Warbler, found during a big day, along the Okanagan River, south of Road 22, near Osoyoos, 17 May (NE, m. ob.). The bird provided British Columbia with its 10th record of the species. A male Chestnut-sided Warbler was found along Lohbrunner Road in Saanich, 31 May (CH, m. ob.). At Queen Elizabeth Park in Vancouver, a male Blackpoll Warbler was seen, 13 May (PG). Along the Selkirk College Trails in Castlegar, a Palm Warbler was present 3–4 May (GS, m. ob.). Another Palm Warbler was along Colvalli Road in Wardner, 29 May (BD, SD). A male warbler identified as a hybrid Black-throated Gray x Townsend’s Warbler in Jericho Park in Vancouver, 25 Apr, was a stunning bird (LI). British Columbia’s eighth Summer Tanager was photographed at a private garden in Invermere, in the East Kootenays, 8 May (CG). A male Black-headed Grosbeak visited a garden along Salmon Valley Road in Prince George, 24 May, providing one of a very few records of that species so far north in the province (KH). A male Rose-breasted Grosbeak was at a private garden along Edward Street in Revelstoke, 25 May (DC, et al.). Another male Rose-breasted Grosbeak patronized a feeder in Riske Creek, 20–24 May (SH, m. ob.). Near Prince George, a male Rose-breasted Grosbeak was found along the Chief Lake Road, 27 May (JD). A male Indigo Bunting was seen along the Jack Point Trail at Duke Point near Nanaimo, 6 May (BV, m. ob.). In the Fraser Valley, at Agassiz, a male Dickcissel was seen in a private garden, where it visited a feeder 12–13 May (JM). 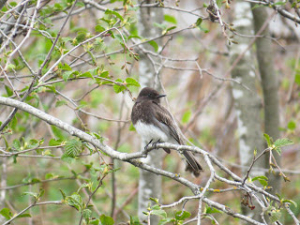 Very rare in interior British Columbia, this Black Phoebe was seen by many along the waterfront in the West Kootenay town of Nelson. 26 Apr 2020. Photo © Craig Sandvig. 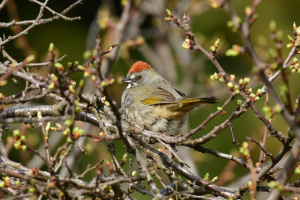 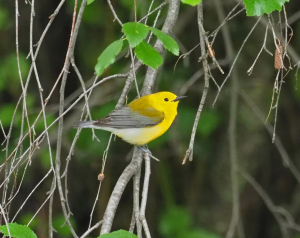 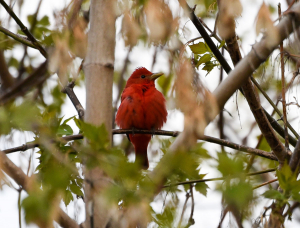 This male Summer Tanager, British Columbia’s eighth, was a one-day wonder in a private garden in the East Kootenay town of Invermere on 8 May 2020. Photo © Cam Gillies 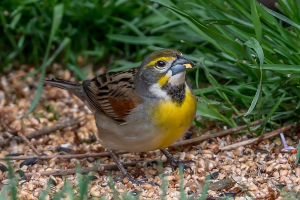 Joan Moore got a shock when a male Dickcissel arrived at her feeder in Agassiz, in the eastern Fraser Valley, on 12 May 2020. It provided the 27th record of this species for British Columbia. Photo © Joan Moore. 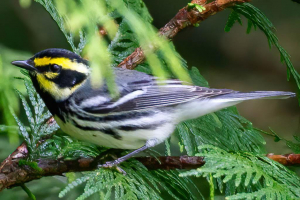