Welcome! You’ve just found your way to all the online content for the March/April 2014 issue of Birding. We hope you enjoy your visit, and Editor Ted Floyd would love to get your feedback.

The Sage Thrasher can be tricky to identify. So it helps to know the song! In a feature article in the March/April issue, Tom Stephenson looks at key features of the songs of the ABA Area’s “desert thrashers”—pauses in the songs, variation in pitch, and the presence or absence of harmonics.
Left: Cover photo by © Bob Steele.

Note: We want to get you as much content as possible prior to the ABA Convention, at which time most of the ABA staff will be fully involved in convention activities. So some of the links below aren’t yet live. Please check in frequently, as we expect to have all content up by the end of the month.

Commentary: Know “S&D.” Paul Lehman, former Birding Editor, exhorts birders in a commentary in the March/April issue to learn “S&D”—shorthand for “status and distribution.” Read Lehman’s commentary, then join the conversation online.
Right: What’s a good way to identify the Orange-crowned Warbler? One of the best “field marks” isn’t physical; instead, it’s the date of the sighting. Know when Orange-crowns show up in your area—and when they don’t!—and you’re much more likely to get the ID right. Photo by © Tom Johnson.

ABA MEMBERS ONLY: “Sightings Online.” Even though the March/April issue is larger than usual, we still weren’t able to squeeze Amy Davis’s “Sightings” columns in. So we’re providing the content online, to ABA members only, in the form of high-quality PDFs. Rarities in January 2014 [coming soon!] include Terek Sandpiper (Hawaii), Common Snipe (Newfoundland), and Streak-backed Oriole (Utah); and Rarities in February 2014 [coming soon!] include Yellow-nosed Albatross (North Carolina), Nutting’s Flycatcher (Arizona), and a remarkable Common Raven (Hawaii).
Left: This Yellow-nosed Albatross stunned birders on a February 22, 2014 pelagic off North Carolina. Photo by © Jeffrey S. Pippen. 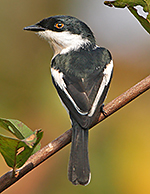 What’s in a Name? There’s only one bird species with the name “Veery.” But a great many birds have the name “thrush.” In a fun and authoritative article in the March/April Birding, Frank Izaguirre looks at how certain bird names appear over and over again; Izaguirre’s focus is on names that are especially promiscuous—“warbler,” “wren,” “flycatcher,” “thrush,” and so forth. But what about all the rest? Check out this supplement to Izaguirre’s article, with an enumeration of all bird names that appear in at least two avian families.
Right: This is a Bar-winged Flycatcher-Shrike. Does that mean it’s a flycatcher in the family Tyrannidae, or a shrike in the family Laniidae? Answer: Neither. The flycatcher-shrikes are in the family Campephagidae—not to be confused with the shrike-flycatchers in the family Platysteiridae! Photo by © Saleel Tambe.

Thrasher Songs. In a feature article in the March/April issue, Tom Stephenson explains, in words and “pictures” (sound spectrograms), what thrasher songs sound like. But you can’t really hear a thrasher on the printed pages of Birding magazine. So let’s listen! Compare these actual sounds with the text and figures in the article, and you’ll be well on your way to mastery of the “impossible” songs of the desert thrashers.
Left: This sound spectrogram shows you what to “look” for in the song of a Crissal Thrasher.

Puzzling Flickers. Where their ranges overlap, the “Red-shafted” and “Yellow-shafted” populations of the Northern Flicker hybridize. These hybrids (or intergrades) are far more common than many birders realize. In the March/April issue, Stephen A. Shunk tells us how to recognize hybrid flickers: the obvious hybrids (first-generation adult males), as well as the trickier ones (females, backcrosses, etc.). In an expanded online version of the article [coming soon!], Shunk provides considerable additional information and perspective on these puzzling—and surprisingly pervasive—flicker hybrids.
Left: This flicker is a Red-shafted x Yellow-shafted hybrid. Note the red extending down from the base of the bill (a Red-shafted character) and the red on the nape (a Yellow-shafted character). Photo by © Bill Schmoker.

Featured Photo 1—Carnacle Geese? Barkling Geese?
These aren’t your garden variety golf course geese in New Jersey. So what are they? Tom Johnson’s definitive analysis appears in the March/April Birding. Do you want to give it a go at ID’ing these unusual geese before you read Johnson’s answers? See what others are saying, and contribute thoughts and questions of your own.
Right: Photo by © Tom Johnson. 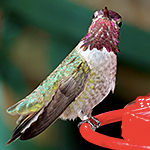 Featured Photo 2—A Problematic Hummingbird in Delaware
This is a beautiful hummingbird. If you don’t look too carefully, it matches well to field guide images of a male Anna’s Hummingbird. But if you take a second or third look… As with the geese above, you can go straight to the March/April Birding for Tom Johnson’s definitive analysis. But if you want to try your hand at the ID challenge before digging into Johnson’s facts and insights, then check out the online discussion and speculation—and even a bit of intrigue!
Left: Photo by © Tom Johnson.

Book Reviews.
Diversity—It’s one of the touchstones of the whole birding experience. In our book reviews, we strive for a diversity of topics, genres, and perspectives. In this issue of Birding, Amar Ayyash reviews Ken Behrens and Cameron Cox’s Peterson Reference Guide to Seawatching, Drew Weber reviews Nick Bolgiano and Greg Grove’s Birds of Central Pennsylvania, and Luke Tiller reviews Conor Mark Jameson’s Looking for the Goshawk.

Check out the complete Table of Contents for the print issue of the March/April 2014 Birding.