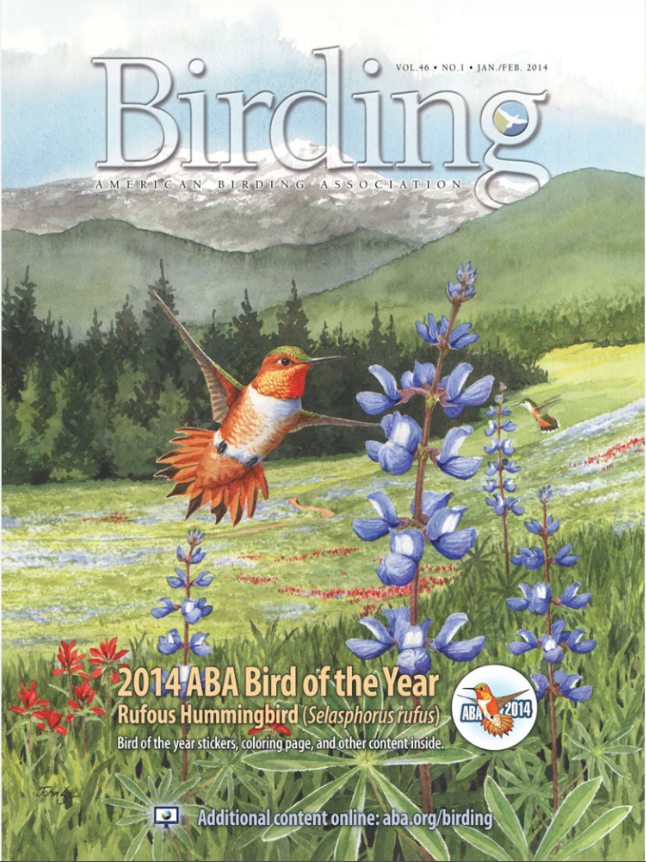 Welcome! You’ve just found your way to all the online content for the January/February 2014 issue ofBirding. We hope you enjoy your visit, and Editor Ted Floyd would love to get your feedback.

This site is a launch pad to all the full-feature content in the January/February 2014Birding. Think of it as your online Table of Contents. Click on the links below, and off you go!

Your Letters. In this issue of Birding, all of the letters to the editor touch in one way or another on the ethics of birding. Our behaviors have consequences—for the birds themselves, for our human companions, and for the entire birding community. What do you consider to be some of the important ethical questions for 21st-century ABAers? Join the conversation at The ABA Blog.

ABA MEMBERS ONLY: “Sightings Online.” If you’re an ABA member, you’ve already seen Amy Davis’s recent compilation in the print issue (pp. 28–31, 64) of North American rarities in November 2013. Do you crave more recent “Sightings?—December 2013 “Sightings” and even January 2014 “Sightings” [coming soon!] are available online as high-quality, full-color PDF downloads.
Right: Tundra Bean-Goose in Nova Scotia, November 2013. This bird is one of only about five ever reported in North America away from Alaska. Photo by © Ronnie D’Entremont.

Breaking Down Bird ID. Many field marks are well known to birders: a Red-tailed Hawk’s belly band, a fall Blackpoll Warbler’s yellow toes, a Lesser Scaup’s pointy head, and so forth. Other field marks can be just as important for bird ID, but are strangely little known. In his article in the January/February Birding (pp. 36–39, click here for the free PDF download[1MB]), Nick Lethaby describes one such field mark. Can you think of others? Share your insights and experiences with other birders.
Left: This “Little Brown Job” (it’s a Brewer’s Sparrow) can be identified entirely by the pattern on its nape. Photo by © Peter Gaede.

Mistakes Were Made. Amar Ayyash’s article (pp. 40–45) is about a famous gull that was misidentified for the better part of a century. But you know the old saying: We learn from our mistakes. The best birders are the ones who have made mistakes, including some real whoppers. Let’s talk about our mistakes—and about the important learning experiences that have ensued.
Right: This gull, collected in Chicago in 1927, was identified at the time as Illinois’ first Western Gull. But it’s probably something else. Photo by © Amar Ayyash.

A Friendly Argument. Birders love to debate the fine points of bird ID. That’s good, that’s healthy—as long as it stays respectful and civil. Spirited back-and-forth promotes learning and discovery. What have you learned from the ongoing debate in Birding (see Peter Pyle’s article, pp. 46–53) on the molts and plumages of Northern Harriers?
Left: How old is this male Northern Harrier? Photo by © Bob Steele.

Photo Quiz Answers. Tom Johnson’s answers and analysis appear on pp. 54–56, but do you want to take one more crack at the November/December 2013 photo quiz? The conversation and speculation are ongoing, and we welcome your input. Or feel free just to eavesdrop.
Right: Photo by © Tom Johnson.

Book Reviews. How do we learn about birds? All four of the books reviewed in this question get at that question in one way or another. Tom Johnson reviews a technical guide to the Pterodroma petrels of the North Atlantic; Julia Zarankin reviews a compendium of avian trivia; Rick Wright reviews a film on junco biology; and Robert O. Paxton reviews a massive exploration of the relationships between birds and humans.

Featured Photo. Ah. “White-cheeked Geese.” Once it upon a time, it was so simple…when all we had to deal with in North America, really, was the Canada Goose. No more. What the heck are these birds? Take a crack at the New Photo Quiz in the January/February Birding. (Answers appear in the March/April 2014 issue.)
Right: Photo by © Tom Johnson.

Another quiz! Our online quizmaster, Tony Leukering, is up to his usual trickery. Have fun with this one! And if you get it right, you are eligible to win a prize.
Left: Photo by © Tony Leukering.

Check out the complete Table of Contents for the print issue of the January/February 2014 Birding.