Much of the region was warmer and drier than normal this season. Interestingly, reports of nesting passerine species throughout the region suggested significantly fewer individuals of many species than the norm. Whether this is a result of the previous brutal winter with late clearing of snow within the region last season is uncertain. However, reports of rare or unusual species continued through the season, with species such as Scopoli’s [Cory’s] (C. d. diomedea), Audubon’s, and Barolo shearwaters in Nova Scotia’s waters, and a Pacific Golden-Plover on the wrong coast in Newfoundland. Crested Caracara continued in New Brunswick, while an apparent expansion of Sandhill Crane into Nova Scotia was noted. A few new and unusual nesting records within the region were also recorded.

A Snow Goose significantly out of range and season when discovered 31 Jul on the Langlade Isthmus, S. P. M. (Nathalie Michel) provided the French island the 3rd record of the species for July. A male Redhead noticed 30 Jun (David Miller) at the Salisbury S. T. P., Westmoreland NB lingered through 2 Jul (Giles Bourque). Later in the season, two male Redheads were observed 30 Jul at the Bouctouche S. T. P., Kent NB (ph. Bill Windsor). Tufted Duck is a regular but uncommon visitor to N. F., so it was no surprise when two males were located 1 Jun in Burton’s Pond, St. John’s, NL (Alvan Buckley, et al.). One Tufted Duck lingered until 23 Jul at the same location (fide Alvan Buckley). Two Lesser Scaup—uncommon to N. F.—were discovered 13 Jun at Stephenville Crossing, NL (Alison Mews, Alvan Buckley, Edmund Hayden). Nesting of Common Eider was confirmed for the first time in S. P. M. when 2 female Common Eider with a brood of 5 young were discovered on a small I. e. of St. Pierre I., S. P. M. by Jean Bouilleau (fide RE).

Quite rare to New Brunswick, a male Ruddy Duck was a good find when located 12 Jul at the Hampton W. T. P., Kings NB (Richard Blacquiere). Also very rare to New Brunswick in summer, a Red-necked Grebe discovered 13 Jul at Castalia Marsh, G. M. I., Charlotte NB (Roger Burrows) lingered through 26 Jul (Marie Dallaire). Considerable excitement was generated this season due to the number of Cory’s Shearwaters observed both in the Bay of Fundy and offshore Nova Scotia in the Atlantic. The first observation of the season was a Cory’s Shearwater in the Bay of Fundy 4 Jul at The Prong, southeast of G. M. I., Charlotte, NB in cold water (ph. Durlan Ingersoll, ph. Carmella Melanson, ph. Hank Scarth, et al.). This individual was well studied and photographed by those on board and later the individual was identified as a Scopoli’s Cory’s Shearwater (C. d. diomedea) (Steve Howell, fide Jim Wilson). Meanwhile, in Nova Scotia waters, 7 Cory’s Shearwaters were observed 11 Jul during a pelagic trip off Sambro, H. R. M., NS (Alix d’Entremont, et al.). On the same day—again in the Bay of Fundy—3 Cory’s Shearwaters were found off Brier I., Digby, NS (Avery Bartells, Morgan Brown). Mark Dennis reported a Cory’s Shearwater 15 Jul at Baccaro Pen., Shelburne, NS. Two Cory’s Shearwaters were observed and photographed at The Pong, southeast G. M. I., Charlotte, NB. The first was observed 16 Jul and the second was noted 23 Jul in the same general locale (ph. Durlan Ingersoll, ph. Jennifer Piercy, m. obs.). It was not clear if they were the same or separate individuals, but they were not the individual observed 4 Jul (fide Durlan Ingersoll).  A Sooty Shearwater was a surprise find when observed 23 Jul from land at Covehead, Prince Edward Island National Park, Queens, PE (Kathleen MacAulay). Approximately 20 Manx Shearwaters lingered between St. Pierre I. and Langlade I., S. P. M., France, during the month of Jul (Joël Detcheverry). During pelagic surveys on an NOAA vessel, an Audubon’s Shearwater was discovered 16 Jun 78 nm south of Cape Sable, Shelburne, NS (Michael Force, Peter Duley); and a Barolo Shearwater was located 15 Jun (Michael Force, fide Paul Lehman) in the same area. Both were excellent finds for Nova Scotia.

American Oystercatchers again returned to their Nova Scotian breeding grounds at Cape Sable, Yarmouth and were observed throughout the season with a maximum of two adults and one immature reported (fide Rick Whitman). An extremely rare Pacific Golden-Plover was a surprise discovery 16 Jul at Cape St. Mary’s, Avalon Pen, NL (Dave Trently, ph. Mark Amershek, et al.) and provided the province with its 4th record of that species. Uncommon to N. F., two Piping Plovers were sighted 14 Jun at Port aux Basques, NL (Alvan Buckley, Alison Mews). An adult Piping Plover found on a nest 8 Jul at the Gully of the Grand Barachois, S. P. M. was also considered uncommon for the region (RE, Alexandre & Guillaume Corbeau). Evidence of a successful breeding attempt at the same locale was reported when 3 adult Piping Plover and 4 chicks were discovered 19 Jul (Laurent Jackman). A rare vagrant to S. P. M., one Upland Sandpiper was discovered 15 Jul on the Langlade I. Isthmus, S. P. M. (Laurent Jackman). Ten Whimbrel present 1 Jul on Miscou I., Gloucester NB (Leon Gagnon) were considered quite early—perhaps failed breeders. An adult Least Sandpiper in the company of a Least Sandpiper chick reported 18 Jul at Back Cove, H. R. M., NS (ph. Christopher Peters, Kate Steele) was unusual, as most breeding attempts of this species in Nova Scotia have been on Sable I., NS (fide IM).

Northern Fulmar continued again this season to investigate Grand Colombier I., S. P. M., presumably for breeding purposes, but as of yet, no attempt has been made to do so (fide RE). A Long-tailed Jaeger considered uncommon to S. P. M. in summer was observed 2 Jun northeast of Miquelon, Miquelon I., S. P. M. (RE). Quite rare in summer a Black-legged Kittiwake was found on land 20 Jun at East Point, Kings, PE (ph. Kathleen MacAulay). Only 3 Laughing Gulls were reported this season in Nova Scotia, as compared to the approximately 1,098 birds reported post-Tropical Storm Arthur in 2014 (fide IM). Individual birds were reported at Taylor’s Head P. P., H. R. M., NS 19 Jun (Chase & Robert Moser); The Hawk, Cape Sable I., Yarmouth, NS 9 Jul (Mark Dennis); and off of Brier I., Digby NS 11 Jul (Mark Dennis, Avery Naggy-MacArthur, Morgan Brown). Two Little Gulls, rare to N. F., were a surprising find when discovered 18 Jun (ph. BM, Ken Knowles, et al.) yet they lingered to 7 Jul (fide BM) at St. Shotts, Avalon Pen., NL, where the species had not previously been reported. A Royal Tern provided New Brunswick with its 6th record of that species when it was found 13 Jul on Machias I., Charlotte, NB (Ralph Eldridge). In Nova Scotia, a rare occurrence of Sandwich Tern for the season was documented 21 Jul when one was photographed at Cape Sable I., Yarmouth, NS (ph. Mark Dennis).

Records of SANDHILL CRANE this summer began with a report (via DAC) of two photographed by Pam Baker near Ship Harbour, H. R. M. 4 Jun. They were not reported later, and may have still been moving north. More significant were sightings in fields around Shubenacadie. Roberta Fraser was first to see two there 8 Jun, and they were photographed the next day (posted on NSBS Facebook by Connie Bokma), an apparent pair of very brown-plumaged adults. Thereafter, through Jul, there were reports by several observers of one to three individuals on both the Cumberland and Hants sides of the Shubenacadie area, including a report by Donald Gorham of an “extremely low flyover” of four adults across the “major highway” (presumably 102) 16 Jun. Equally impressive were the three cranes reported by John Wile to be frequenting fields along John Black Rd., which runs northeast out of Amherst, 23 Jun. John Wile also noted that others claimed to have seen up to seven. The three were last reported there 5 Jul by David Bell, but one, possibly from the same group, was heard calling at a distance in fields west of A. P. B. S. 19 Jul (FLL, KLO). Clearly something new was happening in the province; all will be clearer in the next fall-season report. Fide Ulli Hoeger. 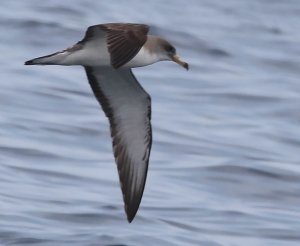 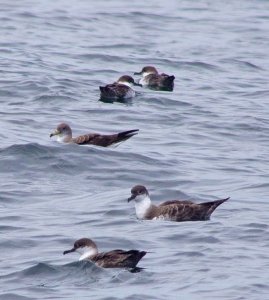 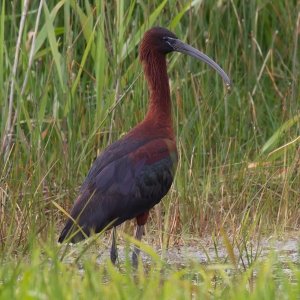 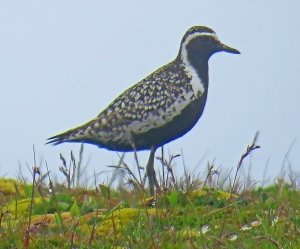 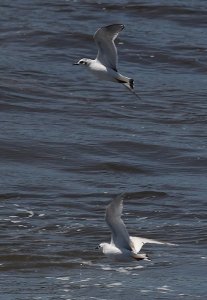 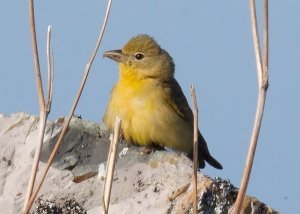