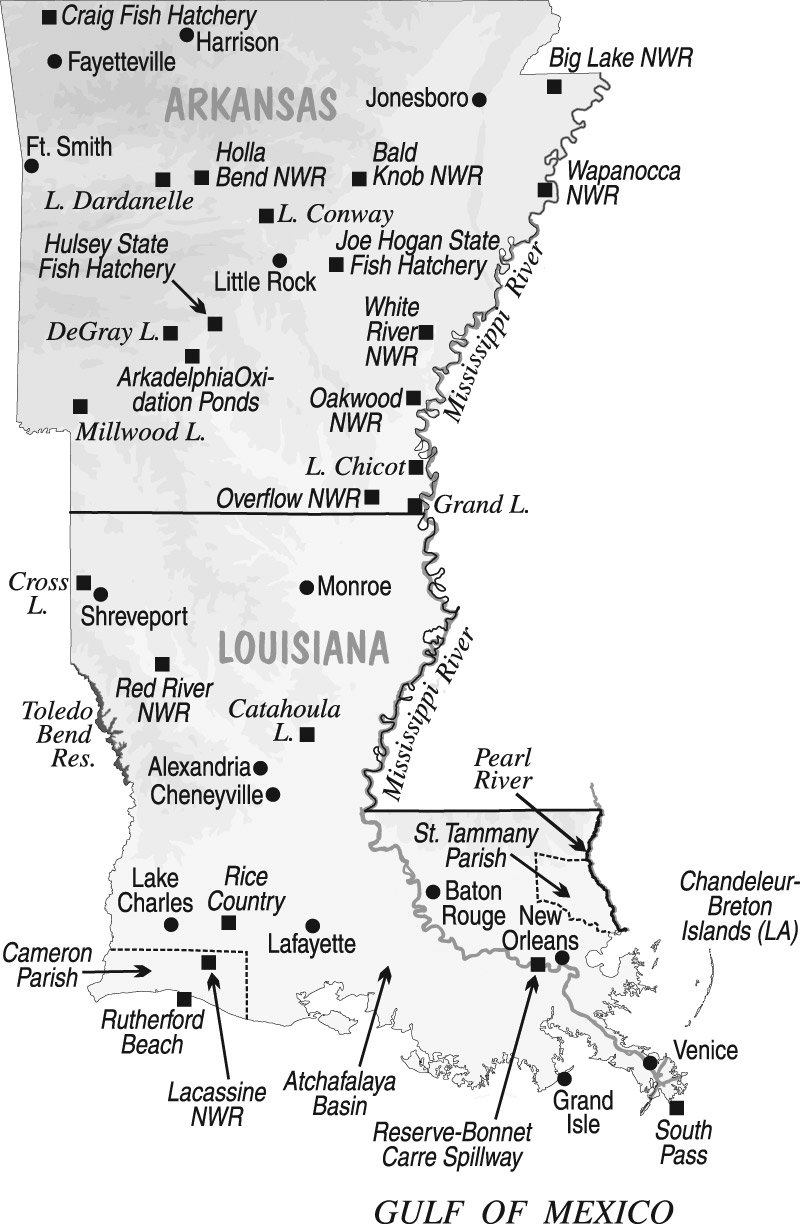 Very rare away from the southeast corner of the state, two Fulvous Whistling-Ducks were photographed 14 May at BKNWR (DC). Only about the seventh for Arkansas, a very rare blue-phase Ross’s Goose was found in eastern Miller 11 Mar (CMi). Two White-winged Scoters were reported in Louisiana: one 5 Mar in Terrebonne (KR), and one at Port Fourchon, Lafourche 23 Mar (WM).

Inca Dove is rare and local in Arkansas, and out-of-range sightings were noted at three locations: just south of Pottsville, Pope, where one was photographed 27 Apr (K&LN); south of Dardanelle, Yell, where there were two on 22 May (CMa); and Fayetteville, Washington, where there were two on 17 May (PP). Single White-winged Doves were reported from four locations in Arkansas: Little Rock, Pulaski 6 Apr (PB); Wooster, Faulkner 7 Apr (ML, PMc); Lake Fayetteville, Washington 27 Apr (VGK, PS); and Gillett, Arkansas 26 May (GH, AlH). White-winged Doves are experiencing a slow range expansion in Arkansas, yet are still quite rare away from the Fort Smith area.

Rare transients in Arkansas, Black-billed Cuckoos were well-represented with four reports: one at Bayou DeView WMA, Poinsett 6 May (ED, KK); one at Cabin Creek Rec. Area, Johnson 6 May (LA); one at Knobel, Clay 7 May (JM); and one west of Jonesboro, Craighead 13 May (RR). Lesser Nighthawk probably occurs annually in Louisiana, although it can be hard to find; two were detected during the season, one at Peveto Woods, Cameron 13 Apr (PEC) and one at Rutherford Beach, Cameron 28 April (BL). Three Vaux’s Swifts were reported in Baton Rouge, East Baton Rouge, LA, on the relatively late date of 9 Apr (DFL). An Allen’s Hummingbird photographed 9 Mar at Bryant, Saline represents a long-overdue first occurrence for Arkansas (JF, DH, AdH, JD).

Quite rare in the northern half of Arkansas, two Common Gallinules were photographed at Claypool Reservoir, Poinsett 26 May (RR). Black Rail has recently gone from a complete mystery in Louisiana to a species whose habits and habitats are coming into focus; however, one calling at Lighthouse Road, Cameron 15–26 Apr was away from known sites (MLB, OJ, DFL). Five stopover Sandhill Cranes near Waldron 1 Mar were a surprising first for Scott, AR (PMi, WHSBC).

Rare in spring in Arkansas, a single Black-bellied Plover was observed at BKNWR 8 May (K&LN). A remarkably early Upland Sandpiper 17 Mar at Woolsey Wet Prairie, Washington AR established a new early arrival date for this species (VGK). Seven Whimbrels at the state fish hatchery in Centerton 15 May were the first for Benton, AR since 2002 (MG, JN). Also in AR, two Marbled Godwits near West Memphis 12 Apr (RS, VS, MT) were a surprising first for Crittenden, and one east of Texarkana 19 Apr was just the second for Miller (CMi, KM). A Buff-breasted Sandpiper near Hindsville, Washington 4 May (PP, TL) was another very rare transient for AR. An amazing 13 American Woodcocks were observed near the Roundhill area of the Ozark NF, Searcy AR 14 Apr (LA). Very uncommon in spring in Arkansas, 29 Willets were observed roosting on a sandbar at Cadron Settlement Park, Faulkner 25 Apr (CMa).

A badly-worn Iceland Gull was on Holly Beach, Cameron, LA 27 Apr (SWC, DLD). Glaucous Gulls were observed in three Louisiana locations: one on Elmers Island, Jefferson 18 Apr–8 Jun (JG, JP, KW); one on Whiskey Island, Terrebonne 9–15 May (AA); and one on the Chandeleur Islands, St. Bernard 17 May (EIJ).

The season’s only Neotropic Cormorant report for Arkansas was that of three birds photographed at BKNWR 22 May (K&LN). Very rare in Arkansas in spring, a Swallow-tailed Kite east of Rogers 6–7 May was a first for Benton (JR). An immature Golden Eagle at BKNWR 24–31 Mar was the season’s only report of that species (K&LN, m.ob.). Single juvenile Swainson’s Hawks were observed in the Atkins Bottoms, Pope, AR 17–19 Apr and 19 May (K&LN, TW, CC). A nice surprise for southern Louisiana was a Rough-legged Hawk in Cameron, Cameron 5 Mar (CB, KO). An immature Crested Caracara photographed feeding on a feral hog carcass in eastern Miller 31 Mar was just the fourth for Arkansas (CM, KM, K&LN).

Sightings of Tropical and Couch’s kingbirds have increased dramatically in Louisiana in recent years, but identifying silent birds and reviewing reports without audio recordings is a challenge that still requires prudence. There were two reports of Tropical/Couch’s in Louisiana this season: a silent individual at Sabine NWR, Cameron on 27 Apr (SWC, DLD) believed to be a Tropical based on bill length; while another at Grand Isle, Jefferson 23 May (MF) gave calls the observer felt were more Couch’s-like. Both were left at the “Tropical/Couch’s” level upon review. A Gray Kingbird was on Grand Isle, Jefferson, LA 11–12 May (BV), where the species has become almost annual in recent years. Rare in spring in Arkansas, a Yellow-bellied Flycatcher was carefully identified at Lake Fayetteville, Washington 15 May (VGK).

Always grand finds in Louisiana, Yellow-green Vireos were at Grand Chenier 13 Apr (JS, USMMGRB) and Grand Isle, Jefferson 26 May (JG). Louisiana’s second Chihuahuan Raven was photographed at Rutherford Beach, Cameron 12 May (PEC, DP). Only the fifth record for Louisiana, a Lesser Goldfinch was at Leesville, Vernon 26 Mar (LM). Rare so far east, a Clay-colored Sparrow was photographed in the Blackwell Bottoms, Conway, AR 27 Apr (K&LN); another was observed 5 May at the Beaver Lake Nursery Pond in Benton, AR, where the species is a bit more regular (JR, JN). A Dark-eyed Junco north of Hector, Pope, AR 2 May was nearly a month late (LA). Rare so far east, up to 10 Yellow-headed Blackbirds were counted in the Blackwell Bottoms, Conway, AR 17–20 Apr (K&LN, TW, AO); another at Waldron 18 Apr was a surprising first for Scott, AR (DarW, DalW). Two Shiny Cowbirds were at Grand Isle, Jefferson, LA 23 May (MF).

A Tennessee Warbler in Little Rock, Pulaski, AR 24 Mar was early by nearly three weeks (JD). Rare in spring, an adult male Cape May Warbler was observed at Lake Fayetteville, Washington, AR 12 May (VGK, PS, DM, ZM). A Connecticut Warbler nicely photographed at Creole, Cameron 5 May (RCD) was only Louisiana’s sixth record of this species. A male MacGillivray’s Warbler at City Park, New Orleans, Orleans, LA 1 Mar (JG) was possibly a return from the previous winter. In Arkansas, single “Audubon’s” Yellow-rumped Warblers were observed at Bell Slough, Faulkner 14 Apr (JD) and Lake Fayetteville, Washington 27 Apr (VGK, PS); there are less than 20 occurrences of this form on file for AR. Very rare in spring, an adult male Lazuli Bunting was near Centerton, Benton, AR 9 May (JN).

Significance for Arkansas records is based on Arkansas Birds, their distribution and abundance (James and Neal 1986) and the Arkansas Audubon Society (AAS) online bird record database (for records since 1986). The significance of Louisiana records is based on trends derived from the database of bird record cards submitted to and archived at the Louisiana State University Museum of Natural Science (LSUMNS); records are primarily taken from rare bird reports submitted to the Louisiana Bird Records Committee (LBRC) and to the Louisiana birding listserv (LABIRD). More detailed information on Louisiana rarity reports can be found at www.losbird.org/lbrc/lbrc.htm. County and parish names are italicized. 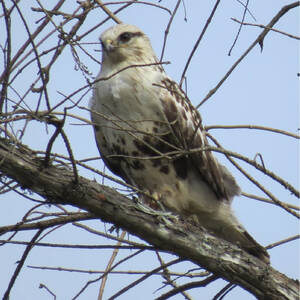 Rough-legged Hawks have become rare visitors to Louisiana, so this individual within sight of the Gulf of Mexico was a surprising spot in Cameron, Cameron Parish on 5 May 2019. Photo © Kathleen O’Shaughnessy. 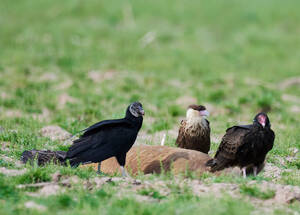 This Crested Caracara was photographed feeding on a feral hog carcass 31 Mar 2019 east of Texarkana, Miller Co, Arkansas, and represents just the fourth occurrence for the state. Photo © Charles Mills. 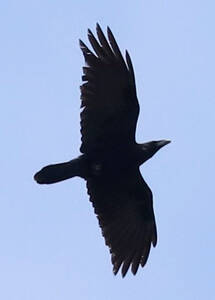 A Chihuahuan Raven at Rutherford Beach, Cameron Parish, Louisiana on 12 May 2019 gave a couple of birders a great thrill and gave Louisiana its second confirmed record of this species. Photo © Dave Patton. 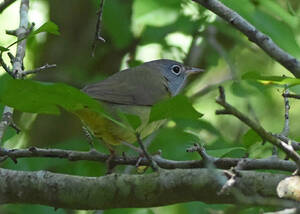 Despite extensive migration coverage, Connecticut Warbler is rarely found in Louisiana. It’s even more rarely seen this well. This great find was at Creole, Cameron Parish, on 5 May 2019. Photo © Robert C. Dobbs.