EDITOR’S NOTE: This interview was translated from its original Spanish by Frank Izaguirre and originally published in the August 2022 issue of Birding Magazine. Below the interview appears in both the original Spanish as well as an English translation.

Julia Tchira, a native of Argentina, composes music inspired by birds and travels to the U.S. for that music to be performed. Photo by © Noel Morroni.

Birds inspire art in many ways: writing, painting, photography, film. Not least of the art forms that birds frequently move people to create is music. The work of composer and violinist Julia Tchira has been heavily influenced by the wonder of birds, including a recent piece she wrote about the ABA’s 2022 Bird of the Year, the Burrowing Owl, which is also found in her home country of Argentina, and can be listened to here: https://tinyurl.com/trumpetBUOW. In this interview, Julia shares the many birds—both Argentinian and American—that have inspired her work, and tells us about the field of sound ecology, the “sounds of extinction,” and how she strove to capture the charm and character of Burrowing Owls through music.

Birding: What made you choose to write a piece, “Burrowing Owl – Lechucita Vizcachera,” about the Burrowing Owl?

that are in danger of extinction in North America, I found that this species had preservation programs in both Canada and the U.S., due to its high degree of vulnerability. It was thanks to these programs that I got to know more about this very special bird. I was captivated! From that moment, I knew I wanted to relate to this bird through my music. It took several years for me to compose the work. In those years, my bond with the little owls grew, and finally I was able to meet them personally in the city of Buenos Aires, in Sarmiento Park, where there is a group of people very dedicated to taking care of two families of this species.

Birding: Your piece captures the alertness, inquisitiveness, and charming character of Burrowing Owls. What insights can you give about how you were able to portray these qualities in music? What made you choose to write for trumpet?

JT: First of all, I am thrilled to hear that, in your opinion, the piece captures some characteristics of the bird! I agree with you that the character of the Burrowing Owl is lovely, which is what motivated me to compose the piece. In this sense, I wished that the movements of the bird be represented. Above all else, I wanted to portray, through the trumpeter, the expressiveness that the birds have with their heads and their curious look, and capture the state of alertness, as you mention, through those repeated “calls” that the trumpet makes with repetitions of the same notes in the high register of the instrument. The whole work is based on the singing and calling of the bird, both in its rhythmic aspects and the notes that predominate. In this way, a particular “color” of the bird is generated, a color of the song that sounds often.

The choice of instrument for the work came in a very natural way. I had been eager to write a piece for one instrument alone, and, in the middle of the COVID-19 pandemic, the National University of Quilmes (the university from which I graduated), offered a postgraduate online course in which the goal was to compose a work for trumpet. Why trumpet? Because the course was taught by Marcos Franciosi (composer and educator) and Valentín Garvie (trumpeter, composer, and educator), and the motivation of the course was to make a work in co-creation with the interpreter (Valentín). This was essential to the compositional process and for how the work later turned out. The trumpeter’s interest in the work and the bird, the extensive and renowned musical experience that he has, the exchange of ideas, and the experimentation of sounds were aspects that enhanced the sound in a formidable way. It really was a beautiful work dynamic, in a collaborative way.

Burrowing Owls, the ABA’s 2022 Bird of the Year, are one of the most charismatic and expressive birds in the ABA Area, but their range also extends well into southern South America. That includes Buenos Aires, where they inspired Julia Tchira to compose a musical piece for trumpet about them. Photo by © Laura Borsellino.

Birding: You’re a “sound ecologist composer.” What does that mean? How did that influence this piece?

JT: I’m always interested in talking about sound ecology. We can define it as a discipline that studies the relationship, mediated by sound, between living beings and their environment. This discipline originated in the 1960s in Canada based on the concerns generated by industrial development and changes in the sound environment, warning of a sharp increase in noise pollution.

Sound ecology contributed and continues to contribute much toward attentive listening of our sound environment taken as an entity, an object to be observed in itself, which gives us information about the environment around us. I consider that my piece is strongly related to this discipline, especially the inspiration for the music (the song of the bird). When people actively listen to it, consciously choosing to listen to these sounds, I hope I have made the world for them a little more beautiful.

Birding: You have expressed interest in making sure your music focuses on the sounds of extinction. What does that mean? How did you make that a part of this composition?

JT: Currently my composition project focuses on the sounds of extinction: that is to say, the choice of sounds I use in my works is based on those sounds that exist now but are likely to soon disappear. For that reason, the birds I choose for my works are very precise.

As a composer, I feel the desire to bond with the environment in which I live, and I always ask myself what I wish to communicate. We are witnessing an unprecedented climate crisis that involves us as human beings, the rivers, the seas, and the ecosystem as a whole. Here we are, today, living in this particular moment in history. I believe all of us, wherever we live, can contribute to the care of nature. We are all part of the problem, and also part of the solution. In my music, I choose to have voices heard that are remarkable and vulnerable, songs that are no longer communicated for the purposes of survival or reproduction, but repeated through the poetry of music. 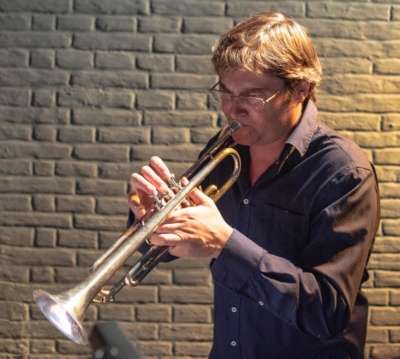 Trumpeter Valentín Garvie collaborated with interviewee Julia Tchira as she composed “Burrowing Owl – Lechucita Vizcachera,” her tribute to the ABA’s 2022 Bird of the Year, the Burrowing Owl. Photo by © Arnaldo Colambaroli.

JT: Here in Argentina, I had the pleasure of meeting a community of this species, and they are lovely. A friend, Laura Borsellino, is part of a group that takes care of a family of Biscayan owls called “Project Lechus,” and helped me get to know them. The bond they’ve established over the years is marvelous. I noticed their confidence and curiosity.

In the process of writing the piece, we went several times to visit them, to observe them, to speak to them, to listen to them. I told them I was composing a piece on them. Something interesting happened. We had a beautiful coincidence. A few weeks after the debut of the piece, four chicks were born. This was a surprise after two years of not reproducing. I felt it as a double birth, that of the work and that of the hatching of the chicks, a wonderful synchrony.

Birding: What are some other birds you like, in either Argentina or in the U.S.? Do you think you might compose music about them?

JT: Some of the birds in the U.S. that move me a lot are the Pied-billed Grebe, Black-Crowned Night-Heron, and scrub-jay, among others, and I would love to compose music about them. There are several birds of Argentina I like as well, such as the Tordo Amarillo [Saffron-cowled Blackbird], the Gallineta Chica [Austral Rail], Albatros Ceja Negara [Black-browned Albatross], the Charlatán [Bobolink]. Those are some, but the list goes on.

Birding: You have a new piece called “Piper Plover Rhapsody” you will be performing in New York in summer 2022. What can you tell us about that? What else can you share about your future plans that Birding readers might be interested in?

JT: Oh, yes! In the first week of August will be the premiere of my new work, “Piping Plover Rhapsody,” and I’m very excited about this. I wrote this work during a composition course called “Atlanticx,” organized by the Buenos Aires New Opera Festival, together with Williams Foundation and Hunter College. We will have the honor of having the French ensemble “2e2m” perform our work in New York!

My work is written for marimba, and the little I can tell you is that on this occasion I was inspired by the song of the Piping Plover as a starting point. The Piping Plover, a shorebird that nests on the Atlantic Coast, is endangered in New York. If you don’t know it, look for it on the internet: You will fall in love, as happened to me. There is a lot to say about this work! But I cannot reveal much before the premiere—the details will be revealed in the future. But again, it’s an immense joy.

Some other future plans involve two pieces about two endemic birds of Argentina, also with a high degree of vulnerability. Both pieces will be premiered in Nov. 2022. One of them, for trumpet, focuses on the Macá Tobiano [Hooded Grebe], a bird of Argentinian Patagonia, and the other, for clarinet, highlights the Cardenal Amarillo [Yellow Cardinal], a bird that is exclusively found in South America.