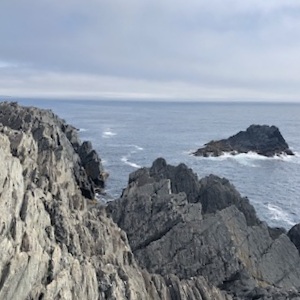 Located in the northeast corner of the ABA Area, the island of Newfoundland is known for its incredible rarity pedigree. But there’s far more to this beautiful place than European vagrants. The city of St. John’s is a gateway to unbelievable nature experiences, from seabird colonies containing thousands upon thousands of charismatic Atlantic Puffins and Northern Gannets, to the sight of dozens of whales feeding near shore, to caribou and ptarmigan on the southernmost tundra on the continent. Last month, host Nate Swick had the good fortune to explore part of it with Birding editor Ted Floyd and The Birdist Nick Lund.

Led by the inimitable Jared Clarke of Bird the Rock tours, they covered the birding hotspots of the Avalon Peninsula, including Witless Bay Ecological Reserve, Cape St. Mary’s, and Cape Race among others, finding amazing birds and generally having an amazing time. Come along with them on this week’s episode.

Also, updates on the proposed south Texas border wall and a way for you to make your voice heard.