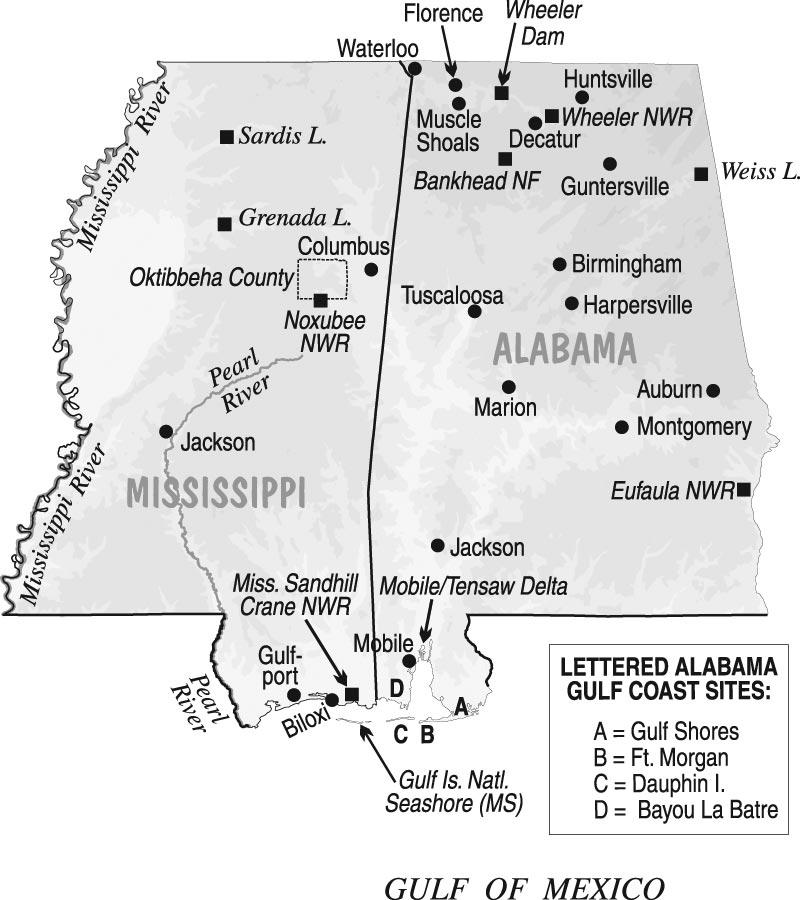 This season was highlighted by Tropical Storm Cindy which made landfall June 22 in southwestern Louisiana. The outer bands brought onshore southerly winds onto the Mississippi and Alabama Gulf Coast for a three day period creating ideal birding conditions. Elsewhere in the region water level drawdowns at Eufaula N.W.R. in Alabama were the best they have been in many years, resulting in a nice assortment of wading and shorebirds throughout the season. In Mississippi Oktibbeha County Lake was lowered for the second consecutive year, providing a number of notable records for the local area. The weather in June was wetter than average while July was near average, with expected drier and hotter conditions persisting throughout the remainder of the season.

Black-bellied Whistling Ducks increased dramatically this year at Eufaula N.W.R. and the surrounding vicinity (m.ob.) in Barbour. The highest tally was 37 adults on 9 Jun (RJ&RLK, FS) establishing the maximum count for inland Alabama. Eight were at the infrequently visited Choctaw N.W.R., Choctaw 20 Jun (JD, LD). In Mississippi up to 6 were present at Columbus Lake, Lowndes 26 Jun (PM, TLS) where they have been regular since 2015. Lastly, 206 was an impressive count along the Mississippi coast at Seaman Rd. Sewage Lagoons, Jackson 6 Jul (m.ob.). An injured Greater White-fronted Goose summered at O.C.L., providing the first such record for the local area (TLS). A Northern Shoveler at W.P.S.L. was present throughout the season providing another first summering record for that area (TLS). Additional summer occurrences for Northern Shoveler in Alabama were at Eufaula N.W.R. 27 Jun (PC) and Chickasaw, Mobile 3 Jun (LFG), the latter providing the third summer record for the G.C. A drake American Wigeon marked the second summer record for the I.C.P. near Marion, Perry 15 Jun (ph. NG). Up to two Green-winged Teal were at Eufaula N.W.R. 2–9 Jul (ph. JW, JAT), a first summer occurrence in the I.C.P.

Rare in summer, Redhead singles in Mississippi were at Biloxi 19 Jun (JL, HC) and Hattiesburg, Forrest 17 Jun (AM). In Alabama an injured bird at Cedarville, Hale 6 Jun (NG) continued from spring, providing the second summer I.C.P. record. Ring-necked Ducks in Mississippi included a male at McLeod, Noxubee 19 Jul+ (ph. JH) and a male/female pair at Hattiesburg, Forrest 17 Jun (AM). A Lesser Scaup at W.P.S.L. marked the fourth consecutive year a male has summered at this location (TLS). A male Surf Scoter was found stranded on the beach at Bon Secour N.W.R., Baldwin, AL 2 Jun (BP). The bird was taken to a rehab center and represented the fourth summer occurrence for Alabama. A Black Scoter at Biloxi 19 Jun was rare for the Mississippi coast (ph. HC, JL). Red-breasted Mergansers are rare but regular along the Gulf Coast in summer. Sightings this year included a maximum of 4 at Pascagoula, Jackson, MS 4 Jun (BJ, LJ), one at Deer Island, Harrison, MS, 16 Jun (DW), and one at Ft. Morgan 3 Jun (MJJ). Further north in Alabama, one was at Guntersville, Marshall 18–19 Jun (MM, AH) where they are occasional in the T.V. in summer. A Ruddy Duck summered at W.P.S.L. providing the fourth summer record at this location (TLS). A maximum of 13 were in Hale 8–12 Jun, a location where this species has recently established a regular summer presence (D&JS, BCG).

A few fortunate observers documented two American Flamingos 22 Jun when they made a brief jaunt into Alabama from Florida at Orange Beach, Baldwin (ph. LLA, KM, et al.). Their presence was associated with Tropical Storm Cindy and established the first state record for Alabama. An Inca Dove at Tanner Williams, Mobile 4 Jun provided a new northern location for this species in the G.C. (LFG). A Common Ground-Dove near Prairie Point, Noxubee 14 Jun (NG) was notable as it represented the 10th record locally and first since 2009. White-winged Doves are rare but increasing in the I.C.P. One was present at Ashford, Houston 19–25 Jun for the second consecutive year (RS), while single individuals were at new locations at Repton, Conecuh 6 Jul (LG, LK, PB) and Luverne, Crenshaw 16 Jul (ph. JAT).

Forty Ruby-throated Hummingbirds near Midway, Bullock 15 Jul established a maximum summer count for the I.C.P. (ECS). Notable Common Gallinule observations included a maximum of 3 at Opelika, Lee 3 Jun–16 Jul providing the fifth summer record for the M.R. (JBr, et al.), a mix of 32 adults and downy young at Eufaula N.W.R. setting a maximum summer count for the I.C.P. 9 Jun (RJ&RLK, FS), and an adult with one downy chick was observed at Wheeler N.W.R., Madison 7 Jul+ where they are rare in the T.V. but becoming a regular breeder at this site (CH). Limpkin sightings earlier this spring were unprecedented in AL, and reports continued into the summer. Up to 2 were at Eufaula N.W.R. 9–17 Jun (ph. RJ&RLK, FS, et al.), providing the eighth Alabama and second Barbour record. An individual was photographed in Prattville, Autauga 19 Jun (KD), and one was at Gantt Lake, Covington 30 Jul (TS), which was the epicenter of the spring sightings.

The M.R. had five separate reports of Wood Storks totaling 6 individuals 18 Jun–12 Jul in Shelby, Jefferson, and Blount where they are considered rare in summer (m.ob.). A large roost of Wood Storks and Neotropical Cormorants was at St. Catherine Creek N.W.R., Adams where between 2500–3000 individuals of both species were observed 30 Jul (B&MS). Magnificent Frigatebirds saturated coastal areas during the passage of Tropical Storm Cindy. Mississippi received the vast majority of sightings, with 41 in Harrison 22 Jun (AD, BW) representing the highest count reported. The summer high count for Double-crested Cormorant in the I.C.P. was set at 30 at Tuscaloosa 9 Jul (NG), while an estimated 500 at Wilson Dam, Lauderdale/Colbert 21–26 Jul established the high summer count for inland Alabama (DJS). American White Pelicans are uncommon in the M.R. in summer; a maximum of 30 was a good number at Logan Martin Dam, St. Clair/Talladega 18 Jun–10 Jul (JBa). Rare inland reports of Brown Pelican in Alabama were received at Walter F. George Dam, Henry 3 Jun (ph. BK) and Smith L. Park, Cullman 8 Jul (EC et al.), the latter providing the fifth all-time record and second summer record for the M.R. The maximum summer count of Great Egret for north Alabama was set at 250 at Wheeler Dam, Lawrence 22 Jun (DJS), while the high count of Snowy Egret for inland Alabama was set at 55 at Eufaula N.W.R. 15 Jul (JAT). Several reports of inland Tricolored Herons were received, including singles at O.C.L. 7–9 Jun (TLS, JH, MS), Eufaula N.W.R. 17 Jun–13 Jul (ph. GEH, JAT, JBr), and Sumterville, Sumter, AL 1 Jul (NG). Yellow-crowned Night-Herons are rare in the B.B.P. of Mississippi, so one individual was notable at John Starr Forest, Winston 8 Jul (TLS). Glossy Ibis continued at Eufaula N.W.R. for the second consecutive summer with a maximum of three observed through 4 Jul (m.ob.). Roseate Spoonbills have become more common in Alabama in recent years. In the I.C.P. at least 12 individuals at four locations were reported 11 Jun–16 Jul (m.ob.). One individual was present at O.C.L. for the second consecutive year 12–26 Jun (TLS), and in north Alabama one was notable w. of Florence, Lauderdale 30 Jul+ (TMH). The impressive roost at St. Catherine Creek N.W.R. had an estimated 300–500 on 30 Jul (B&MS). Swallow-tailed Kites observed in northern locales where they are rarely seen included 2 e. of Newton, Newton MS 21 Jul (JMM) and one at Bankston, Fayette 5 Jul (ASP).

A Western Kingbird was in Verona, Lee 16 Jun where they are uncommon for n.e. MS (WP). Scissor-tailed Flycatcher breeding was confirmed for the first time se. of Starkville, Oktibbeha with one successful nest monitored throughout the reporting period (JH, TLS, et al.). Breeding has been previously confirmed for this species in adjacent counties in recent years. Willow Flycatchers returned to Macon, Noxubee with a possible breeding pair present from spring through 30 Jun (JH et al.). Another territorial individual was at a new location approximately three miles to the south 10 Jun–19 Jul (JH).

A Warbling Vireo continued for the fourth consecutive year at Columbus Lake, Clay MS from spring to 6 Jun (TLS) where they are rare breeders in the central portion of our region. Seven Fish Crows 26 Jul provided the maximum summer count for the T.V. at Wilson Dam, Lauderdale (DJS). Tree Swallow singles were present at two locations in Sumter 1–16 Jun where they are becoming more frequent in this portion of Alabama at the southwestern limit of their breeding range in the state (NG). The maximum summer count for White-Breasted Nuthatches in the M.R. was set at 16 in the Estill Fork area of Jackson 30 Jun (RJ&RLK, FS). Lark Sparrows were seen in good numbers again this year in the B.B.P. with 27 in Oktibbeha and Noxubee, MS and 10 in Hale and Sumter, AL (m.ob.).

Baltimore Orioles are very rare in summer in the B.B.P. One singing immature bird was at Plymouth Bluff, Lowndes 1 Jul, providing the first summer season record since 2002 for the local area (DP, MS, PM, JO). A maximum of two Shiny Cowbirds continued from spring through 5 Jun at Ansley, Hancock, MS (m.ob., ph.), a site that has hosted this species sporadically in recent years. A total of 35 Painted Buntings were observed this season in the B.B.P. in both states (m.ob.). One individual was seen collecting nest material at Sessums, Oktibbeha 4 Jun (JH, ND). The maximum summer count in north Alabama for Dickcissel was established at 37 at Hazel Green, Madison 2 Jul (CWB). 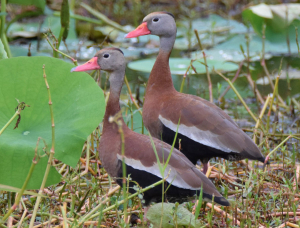 Black-bellied Whistling-Ducks were a regular sight this summer at Eufaula National Wildlife Refuge in Barbour Co, Alabama (here 21 Jun 2017). Initial sightings of birds in the area began in 2015 with only small numbers being reported. Photo © Jordan Broadhead. 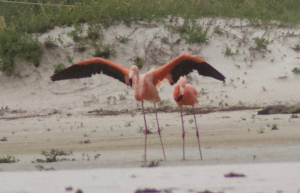 Birding conditions during Tropical Storm Cindy were ideal in both states. Alabama and Mississippi both had single observations of Brown Noddy during the storm period. This individual was at Gulf Shores, Baldwin Co 23 Jun 2017 representing Alabama’s eighth state record. Photo © Andrew Haffenden. 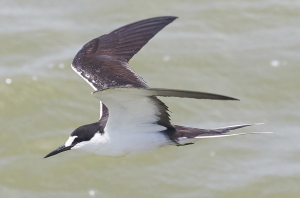 Mississippi had the greatest number of Sooty Tern observations during Tropical Storm Cindy with seven. This one at Gulf Shores, Baldwin Co 23 Jun 2017 was one of two seen in Alabama. Photo © Andrew Haffenden