Have you ever had the experience of being presented with something brilliant and obvious—yet something you’d never thought of, and, as far as you were aware, something nobody else had ever thought of either? I had that experience a bit earlier in the year when I got an alert about cool new content on teen birder Ryan Rodriguez’s Facebook wall. Here’s what Ryan had to say:

“Last summer I decided to start taking habitat photos for each of my lifers. And I think I’ve finally got them how I like. So here’s the last 11 starting with the Ridgway’s Rail in San Diego ten days ago. I really like how these show exactly where I first saw each of these birds. Helps me remember them better.”

Sounds awfully simple, yeah? Well, read the comments—including those of some folks well known and widely admired in the birding community—and the following consensus quickly emerges: “Brilliant idea, wish I’d thought of that.”

It occurs to me that Ryan’s insight is the birderly equivalent of the establishing shot in a movie—the Brooklyn Bridge at sunset or a plane landing on a rainy runway, etc. Like this: 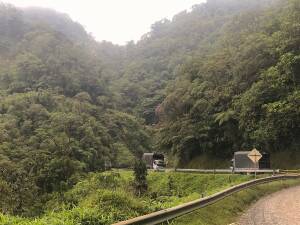 We’re not on the Brooklyn bridge, and we’re not in a plane, but we’re evidently going places. We’re birding our way down a road known as El Trampolín del Diablo, The Devil’s Trampoline, because, when your vehicle goes off over the edge, you go boing! boing! boing! all the way down to the bottom.

Oh, and if you missed the small type (second bend in the road): 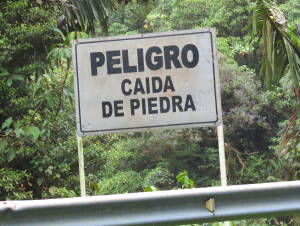 Birding along roadsides in the Andes. Love it! Because just beyond that truck: 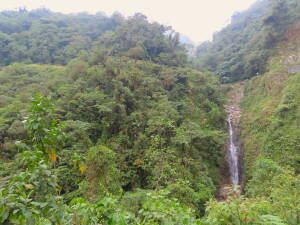 Falling rock, trucks rumbling by, and a waterfall in the rainforest. The perfect setup for this:

Lemon-browed flycatcher, a life bird! (And I think I hear a roadside hawk at the very end, yes?)

Last month on the American Birding Podcast, host Nate Swick and I were talking about how we’ve independently converged on the practice in this modern age of making short videos of lifers and other special sightings. It’s a corollary, I would say, to Ryan Rodriguez’s insight about “establishing shots” for life birds.

Let’s savor a longer, more leisurely look at the lemon-browed flycatcher on the Trampoline:

I love how the bird is “just sitting there,” yet so wonderfully alert. We in the birding community are just beginning to get adept at making videos. (And, Lord knows, I’m at the back of the pack. Can you say “shaky handheld video”?) But I think it’s only a matter of time, the “next big thing” for birders. With video, you get to appreciate a subtle dynamism that obviously cannot be captured in a still photo and that, honestly, gets overlooked in real life too.

By the way, the bird did burst into song from time to time:

To reprise a theme from the previous installment of How to Know the Birds, I’m in a condition of perpetual wonderment at just how much the experience of birding has changed in the past decade. Now at some very crude level, Conopias cinchoneti, was just another lifer—and, in some sense, a particularly banal one. There are dozens of flycatchers in northern South America that go by the name of [yellow-or-yellow-like-color]-[body-part-goes-here] [flycatcher/kingbird/tyrant]. More than 30+ years ago, the first time I birded the Neotropics, a local expert explained to me that they’re all pechos amarillos, the yellow-breasts. But this one, the lemon-browed flycatcher, is different. With this one, I got the goods: the little handheld videos; stills and an audio clip; and that Rodriguez-inspired establishing shot.

I experienced my lifer flycatcher with good old-fashioned optics, too, with binoculars and a scope. Like this: 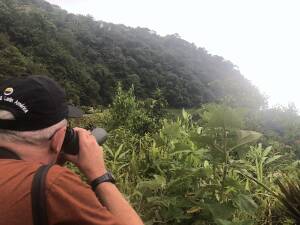 That’s right. A handheld scope. It works! You can watch flycatchers with it. I even got on tanagers in mixed-species flocks with it. This new scope was recently launched by Swarovski, and all indications are that it’s catching on quickly. But this isn’t a place for a product review, although a little birdie tells me to look for coverage in the next issue of The Fledgling, published by the ABA. No, this isn’t the place for a product review, but it is very much the place to reflect on all the recent changes in birding. I’ll never forget the first time I ever saw a telephoto image created by holding a phone up to the eyepiece of a scope. I was amazed. Yet within a year, everybody was doing it. What had recently been amazing was all of a sudden standard operating procedure, proving once again the old, inverted maxim that invention is the mother of necessity.

Will handheld scopes be the next big thing in birding? Will handheld videos of life birds? “Establishing shots,” à la Ryan Rodriguez, for lifers? I don’t know. But this I do know: As long as people delight in seeing lifers, the experience of birding will be in a process of constant and oftentimes dramatic revision.

Yes! I take habitat photos at rarity chases, some may be lifers. The photos show where they were and sometimes how out of place, depending on the species. It also becomes part of the memory of the experience. I also take short videos for the same reason; it adds to the memory and it’s a dynamic capture of the bird rather than a static photo (but I like photos too).

I like the idea of a hand held scope.