Atrio of Red-legged Honeycreepers was a stunning find at Grand Isle, Louisiana on 13 Oct 2022. On the same day, another pair turned up at Curry Hammock State Park in the Florida Keys. Incredibly, honeycreeper reports multiplied through the end of Oct 2022, by which time the species had been reported from an astonishing eleven locations in three Gulf Coast states and the Bahamas, a dramatic example of storm drift vagrancy across the Gulf of Mexico.

The day before the discovery of the first Red-legged Honeycreepers in Louisiana and Florida, huge bands of storms associated with Tropical Storm Karl advanced from Mexico’s Bay of Campeche northeast to the U.S. Gulf Coast, propelling migrating birds north and east. Red-legged Honeycreeper breeds as far north as San Luis Potosí, Mexico. Its year-round and winter range encompasses the Yucatán peninsula, much of Central America and the Caribbean coast of South America, as well as most of Brazil, with an isolated range along the latter’s Atlantic coast. The Mexican-breeding population of subspecies C. c. carneipes is migratory and capable of overwater flight, both attributes making it vulnerable to storm drift. 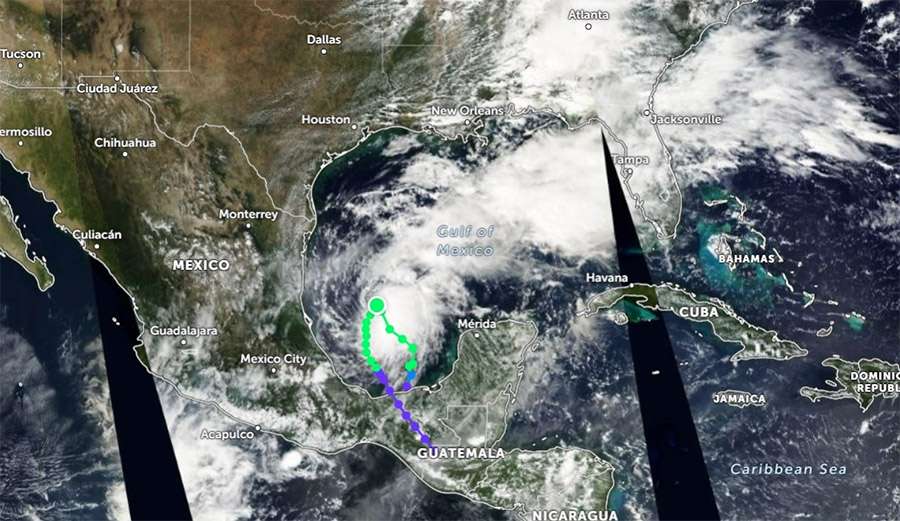 Satellite weather image from 12 Oct 2022. Tropical Storm Karl roils the Bay of Campeche and flings bands of heavy rain across the Gulf of Mexico.

The only previously accepted ABA Area record of Red-legged Honeycreeper occurred in Nov 2014 at Estero Llano Grande State Park in Hidalgo Co, Texas, where it was thought to have been a reverse migrant from the Mexican population. There are some half a dozen reports of the species from the Florida Keys dating back to 2003, but all have been rejected by the Florida Ornithological Society Records Committee due to provenance, as the attractive bird is frequently kept in captivity. Red-legged Honeycreeper is locally common in Cuba, where it was documented as early as 1850, and although at least one ornithologist (James Bond) speculated that the Cuban population was introduced, there is no evidence of this.

Red-legged Honeycreepers glean nectar from flowers with their long, slightly decurved bills; they also feed on fruit and insects. They usually occur in flocks when not breeding, and true to form, most of the records listed here pertain to two or three individuals. All adult males were in nonbreeding plumage, as would be expected for the Mexican-breeding subspecies in boreal fall.

Red-legged Honeycreepers in the ABA Area, 2022.

The final out-of-range Red-legged Honeycreeper showed up just outside the ABA Area in Freeport, on Grand Bahama Island 28 Oct 2022. So great to see this summary! Although not reviewed yet by the Louisiana Bird Records Committee, there were multiple reports of 3 birds at Lafitte Woods on Grand Isle.

I’ve corrected that number. Thanks, Erik!

I’ve been waiting for an article about this, so thank you. There is an error in the number of birds observed in LA. While there was a moment early in their discovery where potentially 4 birds were seen, this was never documented. However, 2 females were documented, photographed together in one photo, which indicates at least 3 birds were at this location.

Thanks, Drew! I’ve corrected it.