We enjoyed 11 glorious days traveling to three very different areas of Kenya: Samburu, Buffalo Springs and Shaba Game Reserves in the dry northern region; Lake Nakuru National Park in the rift valley; and the magnificent Maasai Mara Game Reserve in the south. We traveled in three safari vehicles, each expertly guided by Rockjumper’s Glen Valentine, Forrest Rowland and Daniel Danckwerts. All the participants, including ABA representatives Katinka Domen, John Lowry and Neil Hayward, rotated daily through the vehicles, such that everyone had the opportunity to ride with everyone else.

Our first and last nights were at the Nairobi Boma Inn. For those of us who arrived in advance, the garden on the hotel grounds provided us with our first sample of the local avifauna, with goodies such as Speckled Mousebird, African Paradise-Flycatcher, Red-faced Crombec, Bronze Sunbird, African Pied Wagtail, White-browed Sparrow-Weaver, and Baglafecht and Speke’s weavers.

We set out on a long drive from Nairobi, with stops at a wetland and the high-elevation Naro Moru River Lodge, picking up some great birds including Hartlaub’s Turaco. The next two nights were at the Samburu Simba Lodge, from which we explored Buffalo Springs, Samburu and Shaba, while also birding the lodge property. Highlights include Somali Ostrich (mating pair!), Vulturine Guineafowl, White-bellied and Buff-crested bustards, Pied and Diederik cuckoos, Chestnut-bellied and Black-faced sandgrouse, Gray-crowned Crane, Somali Courser, White-headed and Blue-naped mousebirds, Grant’s Woodhoopoe, Abyssinian Scimitarbill, Northern Red-billed and Eastern Yellow-billed hornbills, Red-fronted, Black-throated and D’Arnaud’s barbets, Pygmy and Red-necked falcons, Red-bellied Parrot, Pygmy Batis, Rosy-patched Bushshrike, White-crowned Shrike, Fischer’s Sparrow-Lark, Northern Crombec, Golden-breasted and Magpie starlings, Red-billed Oxpecker, White-browed Scrub-Robin, Eastern Violet-backed, Hunter’s, Marico and Black-bellied sunbirds, White-headed Buffalo-Weaver, Steel-blue Whydah, Golden Pipit, and Cinnamon-breasted and Somali buntings. I should also mention the Gambaga Flycatcher, an LBJ that excited the guides at the lodge, as it was a lifer for them all.

Being on safari, this was an opportunity to see not only birds, but also the great African megafauna. Mammals included the stately African Elephant, Grevy’s and Plains zebras, Common and Desert warthogs, the beautiful Reticulated Giraffe, Impala, Waterbuck, Grant’s Gazelle, the long-necked Gerenuk, the tiny Gunther’s and Kirk’s dikdiks, and the elegant Beisa Oryx. A Striped Hyena came at night to feed on scraps thrown over fence by the lodge staff. Best of all was a Cheetah with three cubs, which we encountered on two days; we observed the mother stalking prey, and the cubs playing on an anthill and in a ditch by the road – Africa at its best!

The next day we traveled to Lake Nakuru, stopping at a few spots to add some good birds like Klaas’s Cuckoo, Lesser Jaçana, Mountain Buzzard, Cape Eagle-Owl and Sharpe’s Longclaw. Arriving at our lodge for the next two nights, the Sarova Lion Hill, we were surprised to be greeted with a fun native song and dance performance!

Lake Nakuru is famous for its spectacle of thousands of Lesser and Greater Flamingoes lining the shoreline. For several years they were absent from the lake because the water level had risen making it unsuitable for flamingoes. Fortunately, now the water has receded and the flamingoes have returned, gracing us with their pink beauty. We added many other water birds to our list, plus other specialties like Green Woodhoopoe, Common Scimitarbill, Southern Ground-Hornbill, White-crested Helmetshrike and Silverbird.

We were happy to see both Black and White rhinoceros, which sadly have been hunted out of other reserves by poachers. Other mammals added to our list included Rothchild’s Giraffe and African Buffalo. We enjoyed close encounters with Black-backed Jackals, as well as our first pride of female lions resting in the shade.

Finally, we traveled to the Maasai Mara, where we spent four nights at the Mara Simba Lodge. On the way we encountered our first Secretarybird and flock of seven species of swifts. After much searching we scored the range-restricted Kamaroja Apalis, a lifer for all participants including the guides and drivers!

Unlike northern Kenya which was experiencing a multi-year drought, the Mara was wetter than usual. Despite it being the dry season, everything was green, and we had the magnificent experience of torrential savannah rain. We spent three full days exploring the various habitats of the Mara, adding a huge diversity of birds to our list. Some of these has migrated down from the drought-stricken highlands, where they normally occur, to find greener pastures. Perhaps most remarkable were 27 species of raptors, including Lappet-faced Vulture, Bateleur, and Martial and Long-crested Eagles. Particularly impressive was an African Harrier-Hawk, using its wings to climb up a tree in search of its reptilian prey. Other avian highlights included Ross’s Turaco, White-bellied and Black-bellied bustards, White-browed Coucal, Black Crake, Temminck’s Courser, Verreaux’s Eagle-Owl with its pink eyelids, Von der Decken’s, Crowned and African Gray hornbills, African Pygmy Kingfisher, Brown-throated Wattle-eye, Orange-breasted Bushshrike, Gray-crested Helmetshrike, Magpie Shrike, White-bellied and Red-throated tits, 12 swallows including the beautiful White-headed Saw-wing, Fan-tailed Grassbird, Yellow-billed Oxpecker, Fan-tailed, Yellow-mantled, White-winged, Red-collared and Jackson’s widowbirds, Pin-tailed Whydah, Yellow-throated and Rosy-throated longclaws, and Golden-breasted Bunting.

Although this was not the season for huge migrating herds, we did see many large mammals throughout the Mara: African Elephant, Plains Zebra, Impala, Hartebeest, Common Wildebeest, Topi, Thompson’s Gazelle, Waterbuck, Bohor Reedbuck, African Buffalo, Common Eland and Masai Giraffe, with Hippopotamus in nearly every river and pond. We had another family of Cheetahs with four cubs, this one resting in the shade, Spotted Hyena, and many Lions, including females stalking a large Buffalo herd, a group of three young males, and an old male resting on the road.

One of our best experiences of the trip occurred one day on the way back to the lodge. A Serval was sitting on an anthill to the side of the road. As we stopped beside it, the cat started vocalizing, and then its grown kitten crossed the road right in front of our vehicle to join it – so cute!

On our last day, some of us took the long trek across the savannah to the Oloololo escarpment overlooking the eastern edge of the Mara, which has a different forest habitat with its unique set of birds. After quite a bit of searching, we finally found one of our main targets, the magnificent Schalow’s Turaco. As we were looking at the bird, Forrest called out a Yellow-bellied Hyliota, another major target, in a tree on the other side of the road. Before we could get eyes on it, pouring rain began, forcing us to retreat to our vehicles. Since we had to return to our lodge on the other side of the Mara before dark, we couldn’t stay much longer. Just as we were about to leave, the rain stopped, but the bird was nowhere to be found – a disappointing dip, as hyliotas are a unique family, with limited distribution in Africa. But with all of the great birds and mammals we saw on the trip, I have no complaints!

On our rush back to the lodge before dark, we spotted another Serval walking through the tall grass, and witnessed a beautiful African sunset. While eating dinner, we were surprised by the lodge staff with a song and dance routine around our table – a fun conclusion to our trip!

On a personal note, I would like to thank the ABA, Rockjumper, and my fellow participants for a great trip. Thanks also to Rockjumper’s Kenya Partner, Cisticola Tours, who provided the vehicles and drivers, and also guided me on a pre-tour day trip to Gatamaiyu Forest (not included in this report). Having not been to Africa before, I added 360 birds and 40 mammals to my life list. Truly a dream come true! 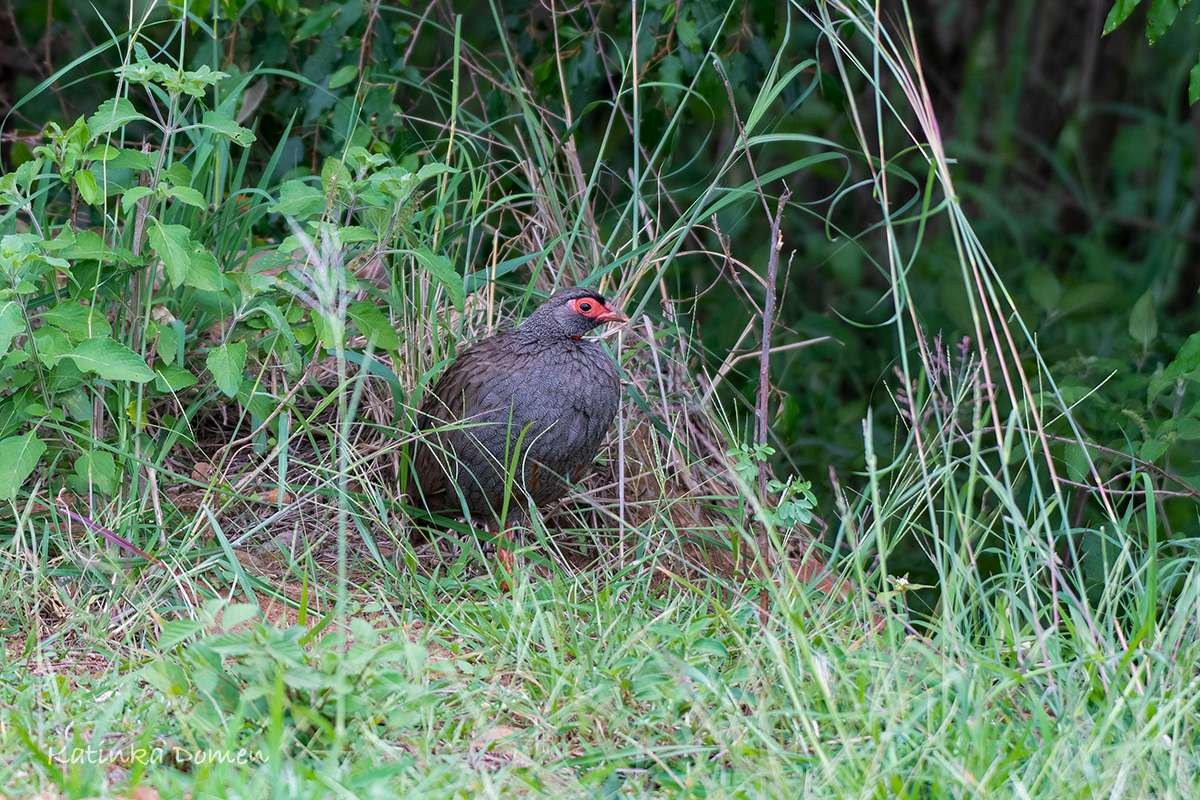 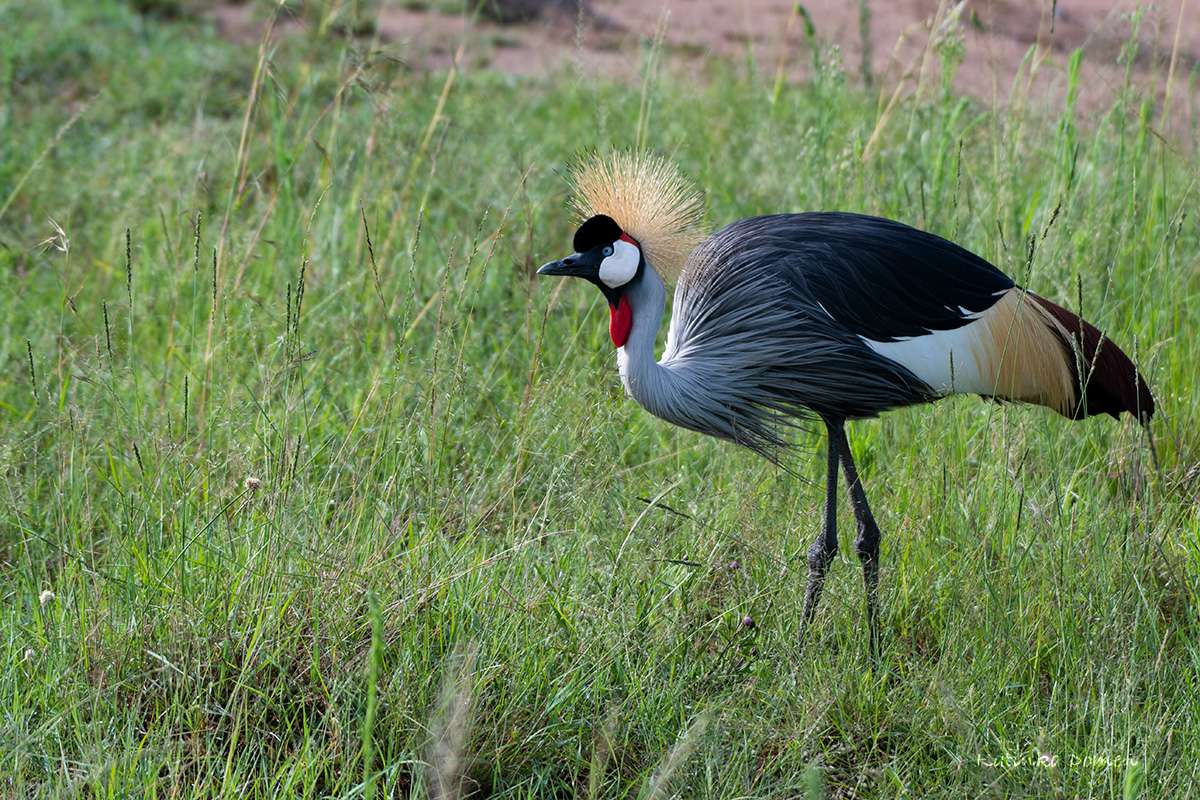 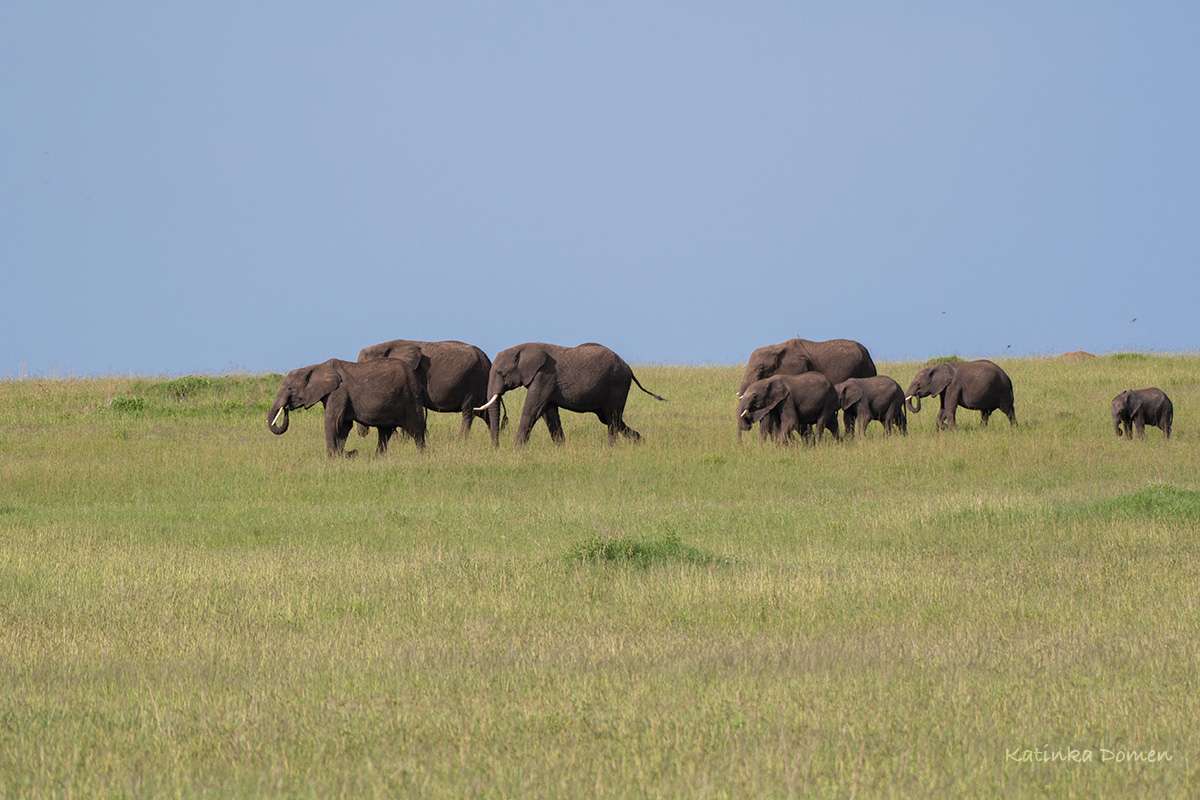 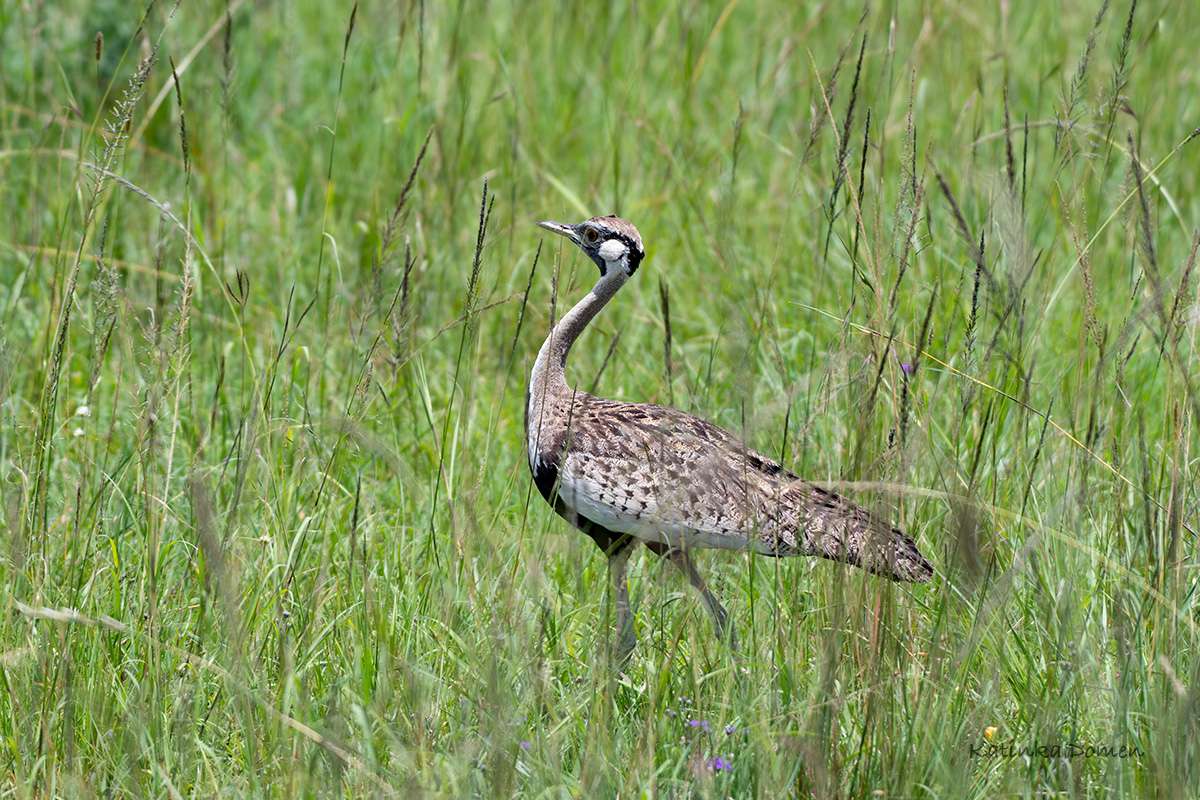 I’m sure it’s not warbler neck, but still… (©Katinka Domen) 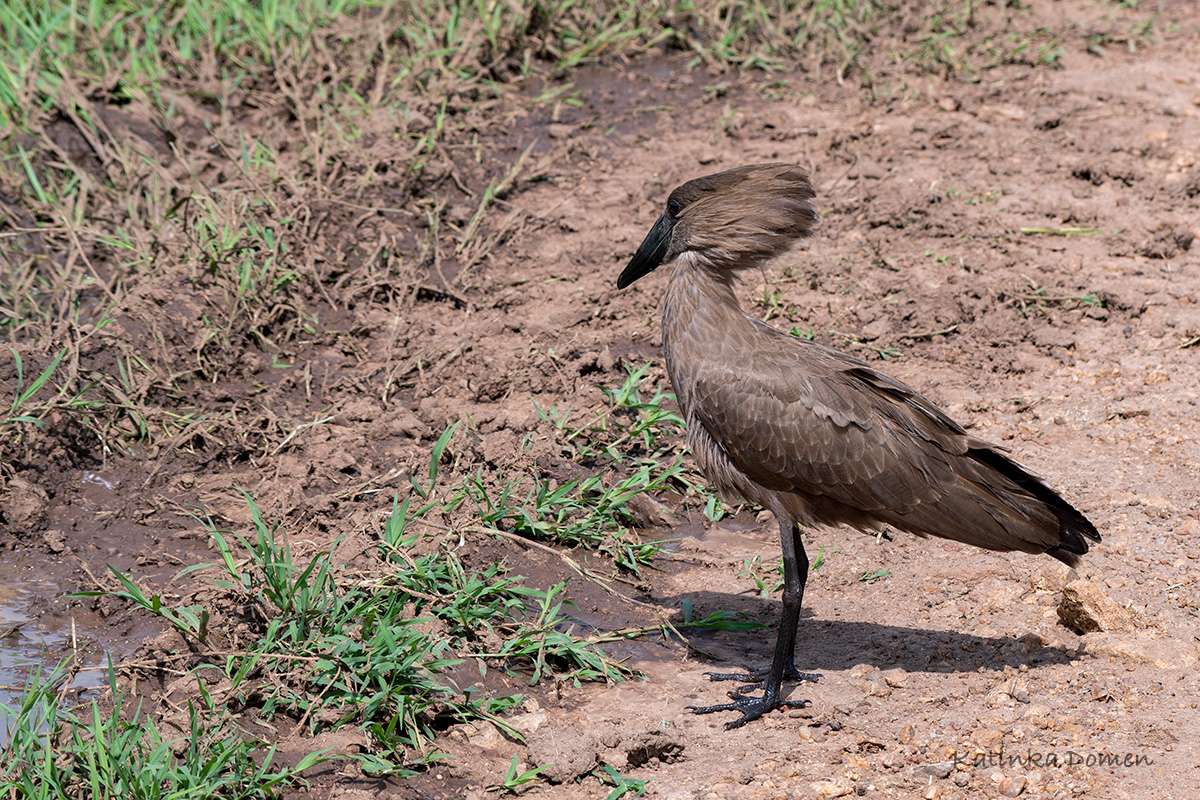 Not super comfy, but the viewing is good (©Katinka Domen) 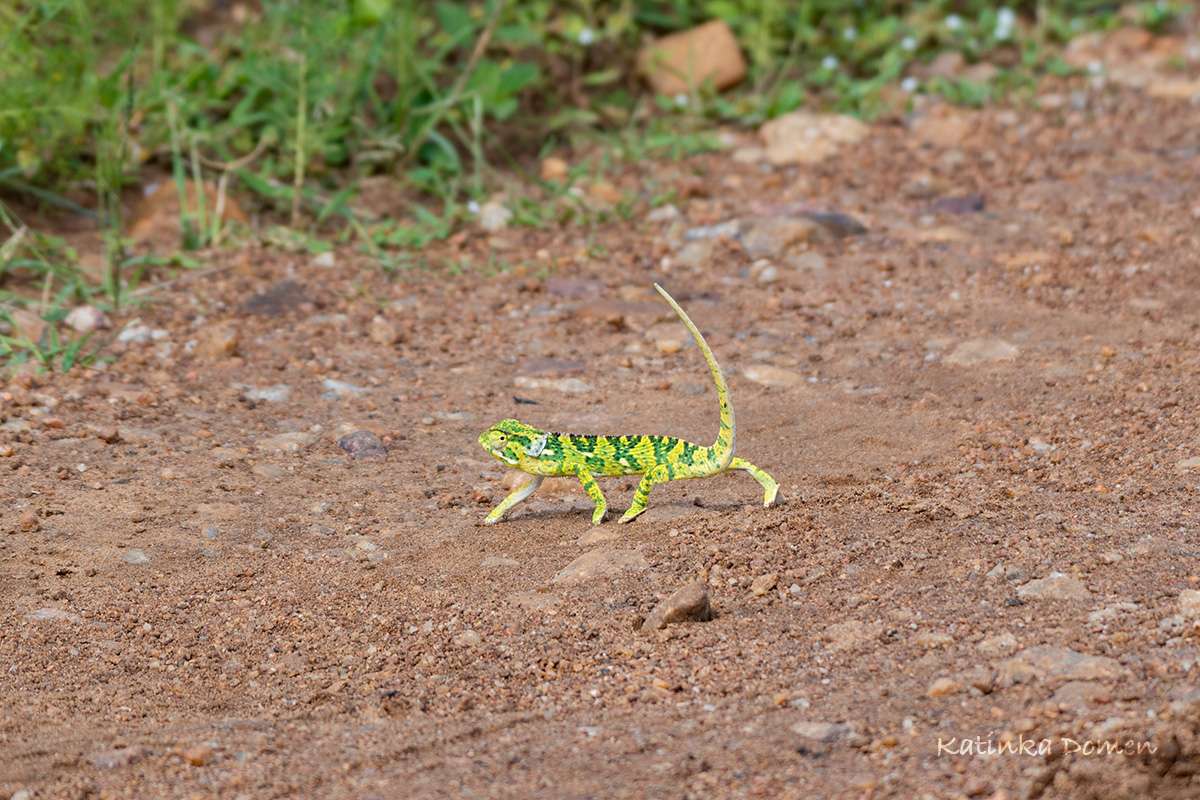 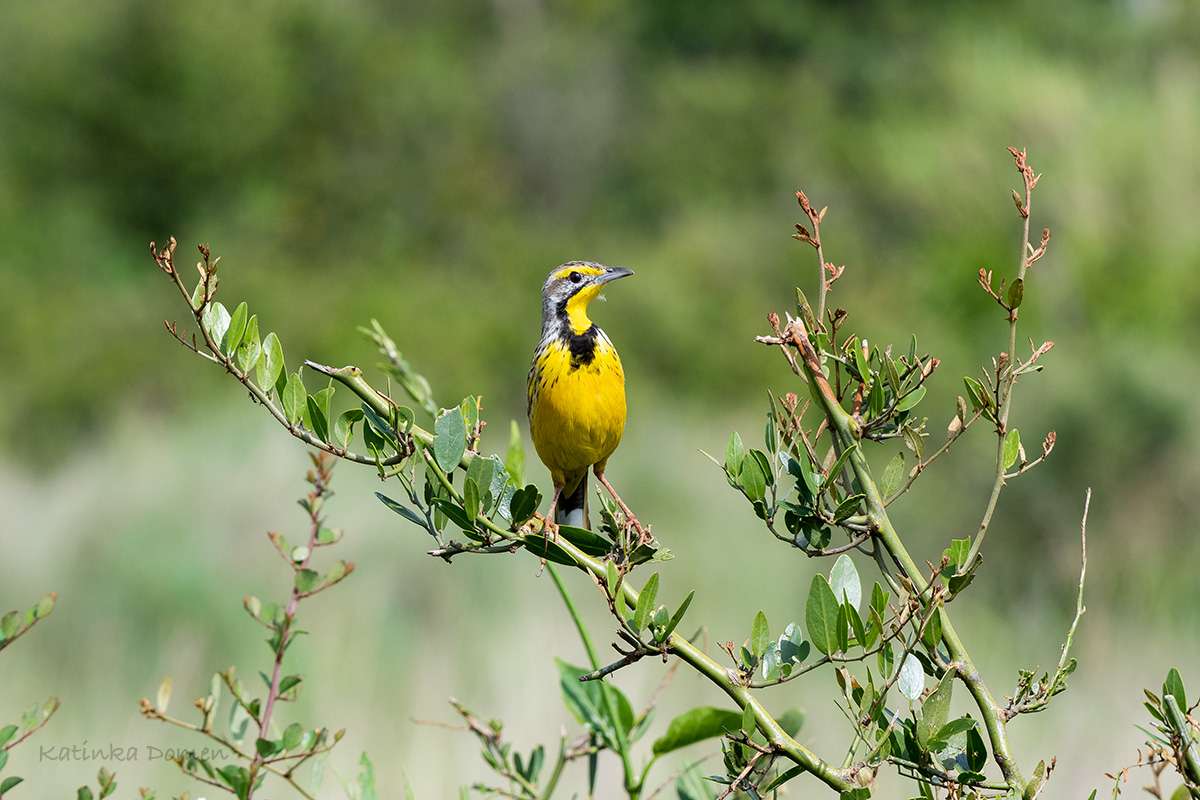 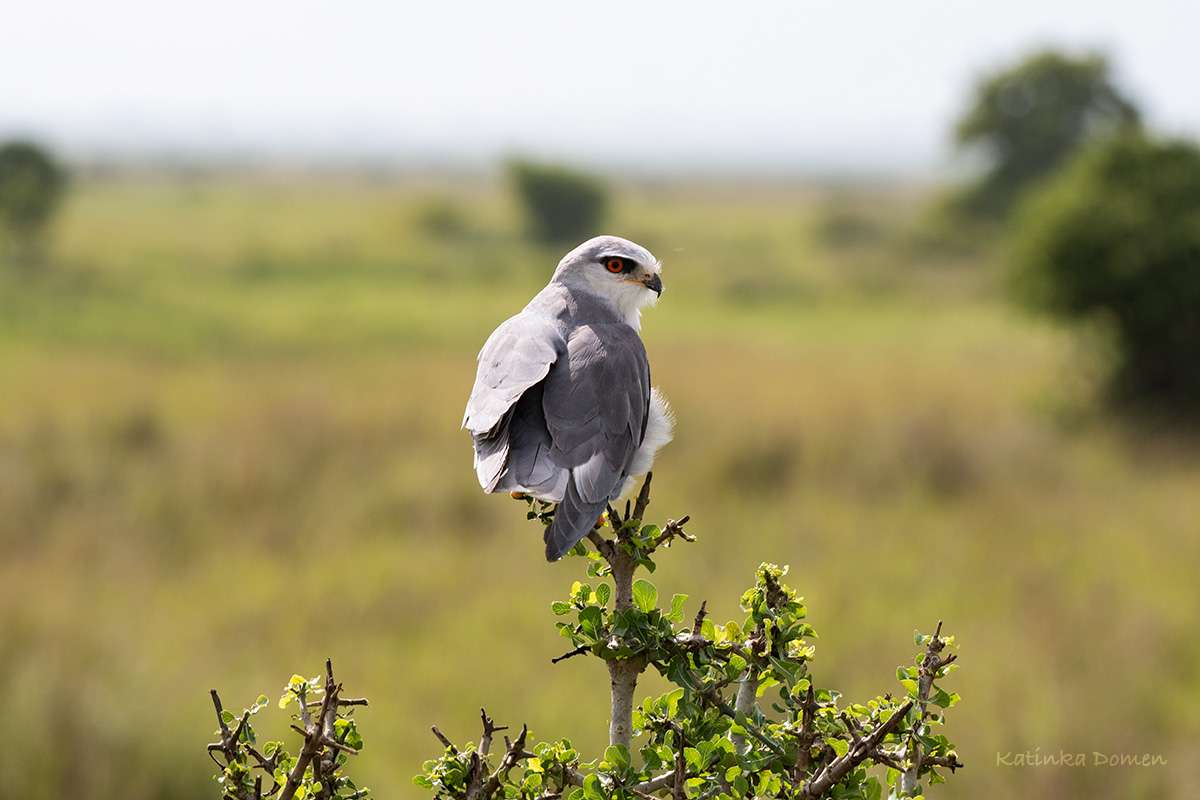 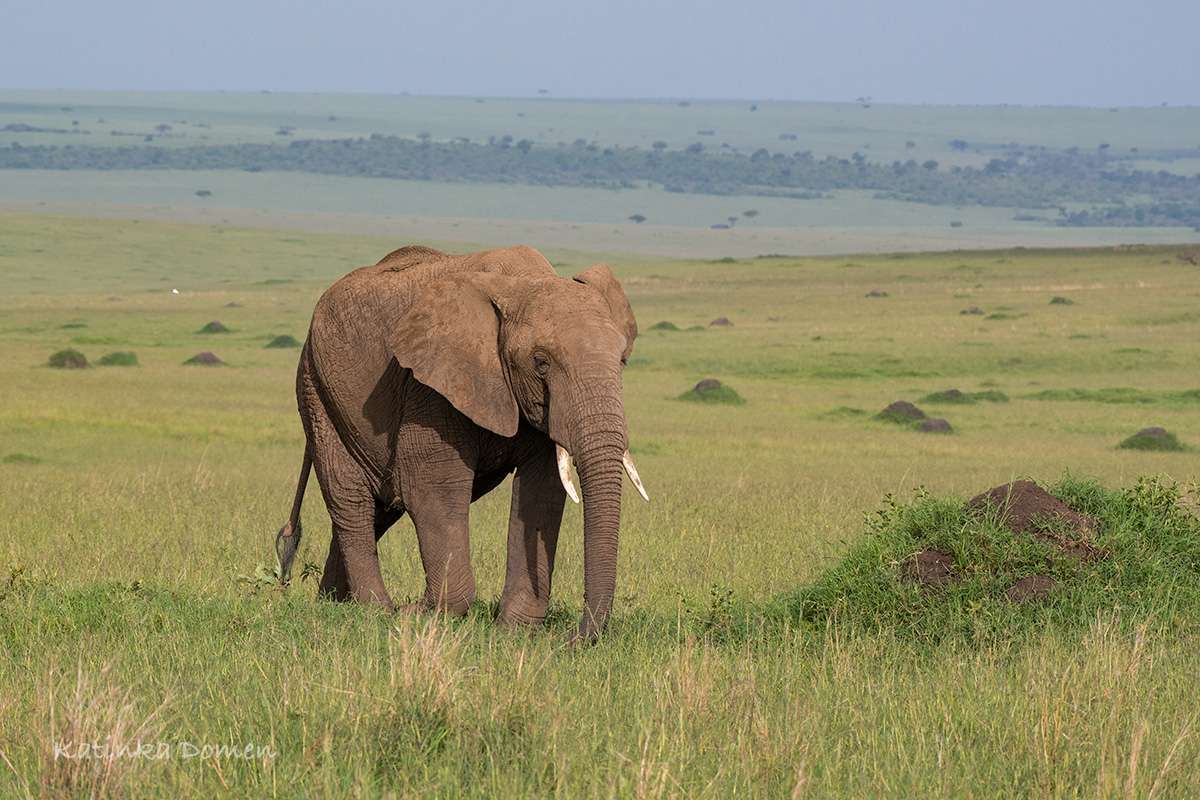 And here’s how it got so green… (©Katinka Domen) 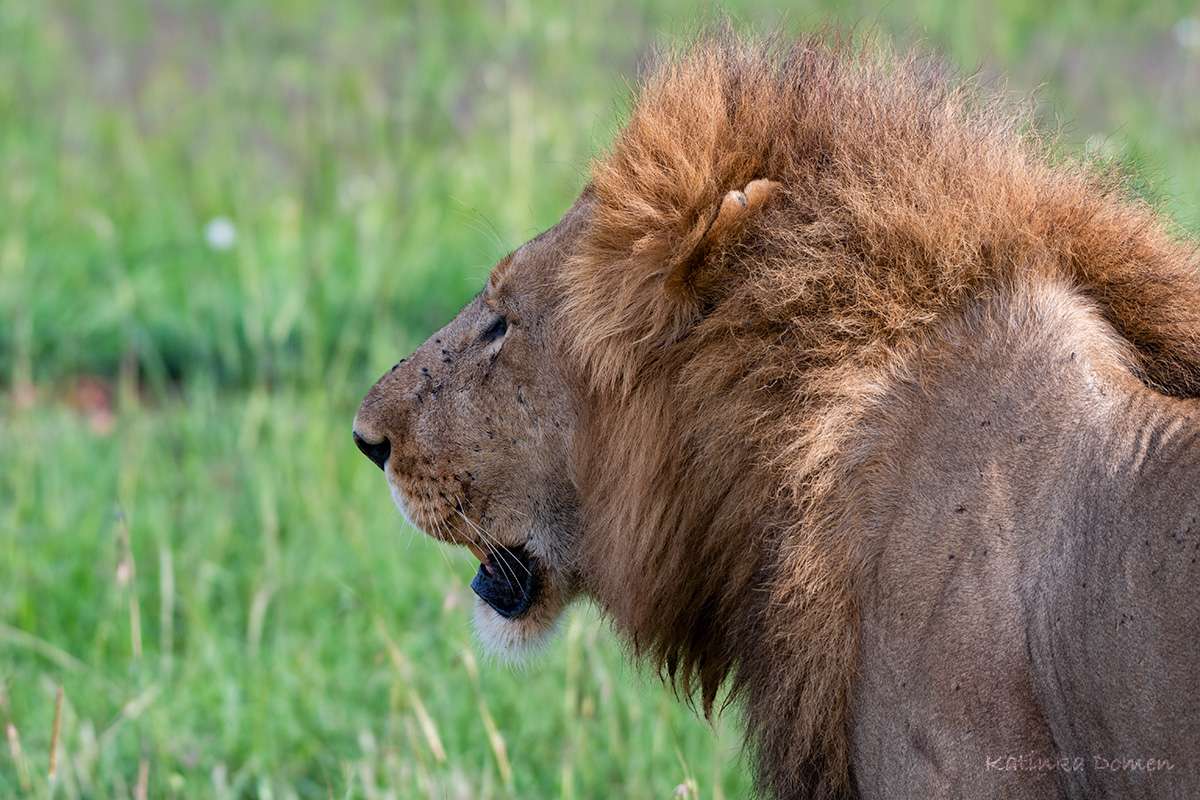 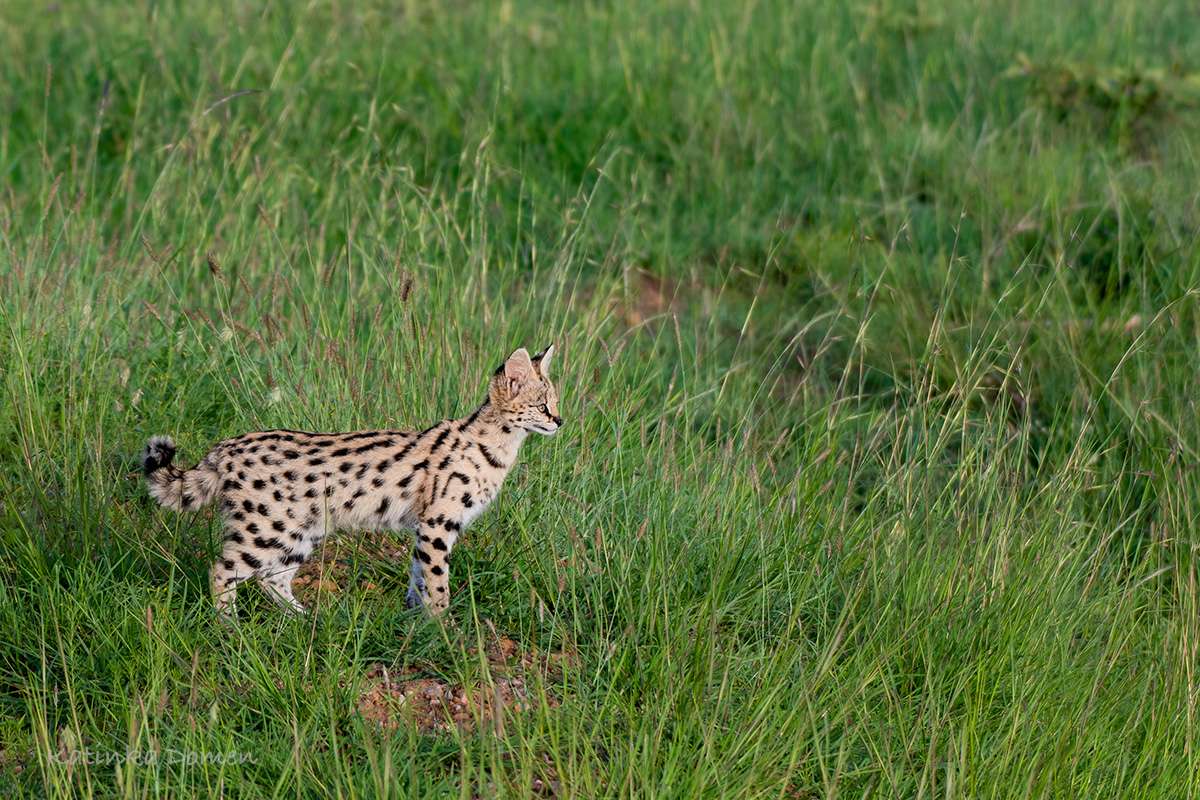 You can now also consult our complete eBird trip report! 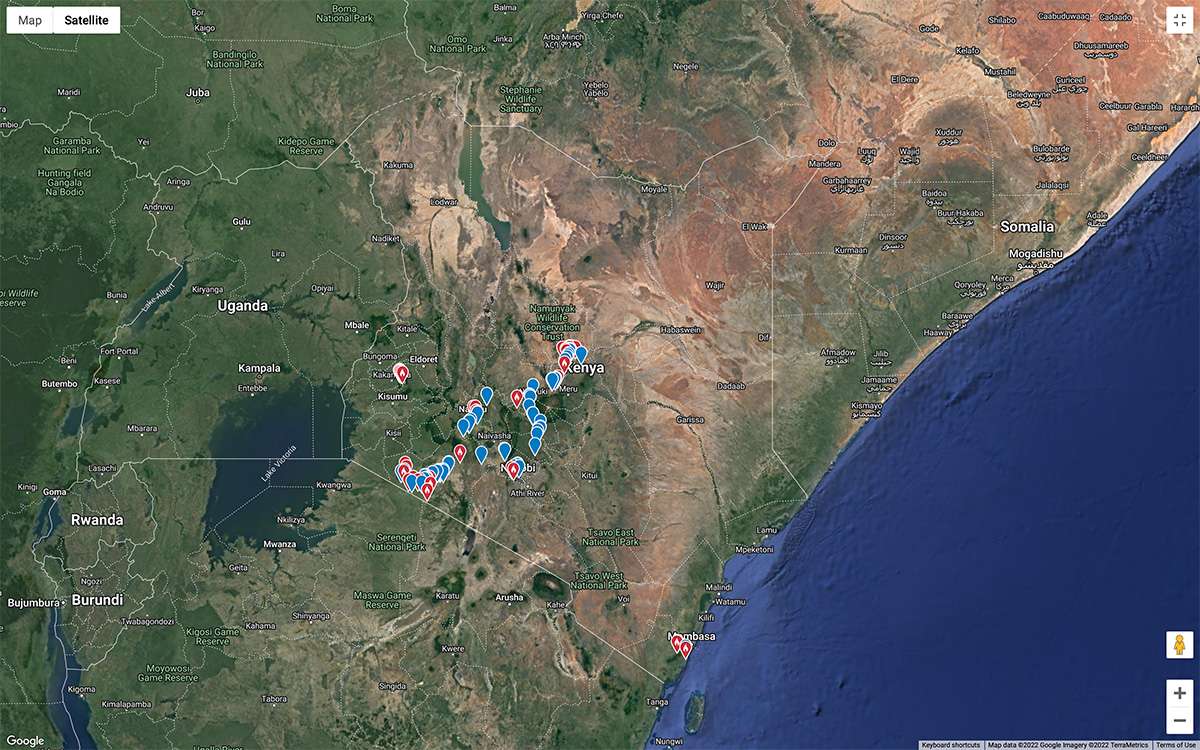 I have worked in Eastern Africa for about 30 years, starting as a Peace Corps Volunteer in 1964. Most of that time has been in-country, but now remotely. What is described in this adventure is quite wonderful – my wife and I have also seen most of these birds and know most of the places. For any birder and/or anyone interested in nature, East Africa is a paradise and should be considered as primary “Bucket List” destination. Best regards to the writer for a great description of a never-to-be-forgotten experience.