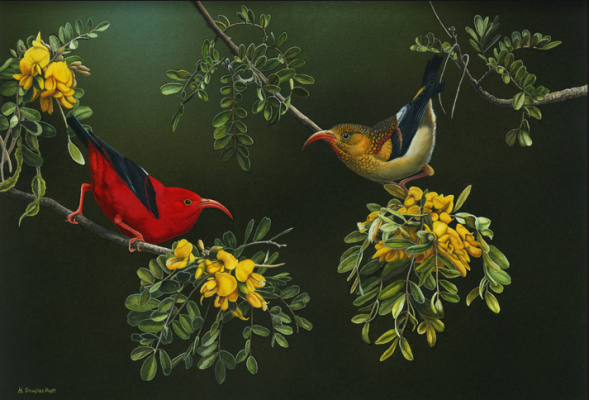 Adult (left) and juvenile Iiwi, as depicted by our 2018 Bird of the Year artist H. Douglas Pratt

With Hawaii’s inclusion in the ABA Area in 2016, the state’s extraordinary native birdlife was added to the ABA Checklist, a process that was finalized in 2017. Birders in the United States and Canada, and indeed those around the world who keep an ABA list, were suddenly introduced to Akekees and Apapanes and Akohekohes, a whole menagerie of exotic looking birds with even more exotic sounding names. The honeycreepers of Hawaii are perhaps the best example of adaptive radiation on the planet, far more colorful and diverse than the more celebrated “finches” of the Galapagos Islands. The cardueline finches that found their way to these islands in the middle of the Pacific Ocean evolved into several dozen species with a dizzying array of colors, bill shapes, and lifestyles. Sadly, the extant honeycreepers are but a pale shadow the diversity that greeted the first humans to arrive on the island, but those that remain offer a tantalizing example of the wonders of evolution and the magic of island biogeography.

There certainly are a great many spectacular honeycreepers on the Hawaiian Islands, but if there is one prototypical Hawaiian honeycreeper it’s the Iiwi (pronounced ee-EE-vee) There could scarcely be a better representative of the family to give the full Bird of the Year treatment and fully welcome Hawaii into the ABA Area.

The Iiwi is at once familiar and bizarre, its colors mirroring the well-known Scarlet Tanager but with an absurd curved bill it uses to probe the flowers of native Hawaiian trees for sustenance. But that black on red takes on another context in its Hawaiian home. The Iiwi is the color of lava–the red molten stuff issuing directly from the earth’s mantle via Hawaii’s famous volcanoes and the black hardened lava rock that make up the islands. And perhaps best of all, Iiwi is still the easiest honeycreeper in Hawaii to see. They can still be found on a number of islands, and a birder only needs to make a short trip inland on Maui or the Big Island into the state’s many protected forest reserves to hear their gurgly warbling song. 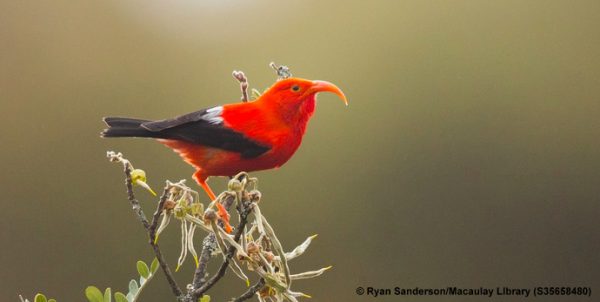 Like the rest of the Hawaiian honeycreepers, however, Iiwi is under threat from mosquito-borne bird diseases like avian malaria. Though the Iiwi has been better able to weather that particular storm than many of its close relatives, its population continues to decline. Because Hawaii is part of the United States it is largely up to American birders to advocate for action to help protect Hawaiian birds like the Iiwi. Fences that eliminate feral pigs from forest reserves, preventing them from creating wallows that attract breeding mosquitoes have proven to be somewhat successful. Ground-breaking genetic research into mosquito biology has also opened some intriguing avenues that could lead to local or wholesale eradication of the menacing insects. The solution is out there, but it requires attention and will from birders on the mainland. This has always been one of the motivating factors in including Hawaii, and its robust birding community and unique birds, in the greater ABA Area.

Unlike many of our past Birds of the Year, we know that relatively few ABA members and North American birders may have seen Iiwis creeping though ʻŌhiʻa trees and probing blue ‘ōpelu flowers. But its important for birders on the mainland not to forget that these birds need help now, and that we have an obligation and an opportunity to do something. That starts with paying attention to them. One of the wonderful things about birding is that knowing any place on the planet through its birds often means that we care more about the conservation challenges of that place. If a tick on a list can encourage birders to visit Hawaii to observe its amazing birds which in turn leads more people to care about their welfare and advocate for their conservation, then the ABA should facilitate that.

So celebrate the Iiwi and Hawaii’s amazing birdlife with the ABA this year!

Formerly Vestiaria, Iiwi is now the sole remaining member of the genus Drepanis, which it shares with the now extinct Hawaii Mamo and Black Mamo. Drepanis is derived from the Greek drepanē, meaning sickle, a reference to the bird’s exaggerated bill. The species name coccineus is from the latin for “scarlet-colored”.

Difficult to mistake for anything in its range, adult Iiwis are strikingly vermilion red all over the body with black tail and wings. A small conspicuous white spot on the inner secondaries is present in both sexes. Bill and feet and vivid salmon-orange. Females slightly smaller than males. Young birds are yellow-olive with more subdued bare parts.

Song is a discordant and variable series of squeaky whistles, described alternately as a rusty hinge or two balloons being rubbed together.