2017 Bird of the Year: Ruddy Turnstone

2017 Bird of the Year: Ruddy Turnstone 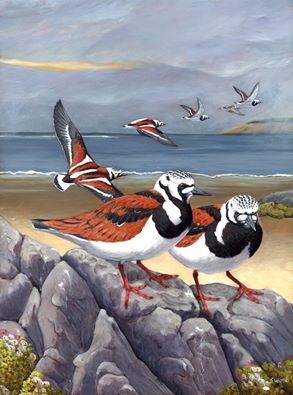 Ruddy Turnstones, as depicted by our 2017 Bird of the Year artist Sophie Webb.

Travel to a beach just about anywhere in the world and you’re likely to see Ruddy Turnstones. That’s a great thing, because who would want to miss the striking shorebirds with the harlequin plumage and the dinky upturned bill? In a family of birds noted for their subtlety, Ruddy Turnstone is flashy. Among those known for their timidity, it is brazen. And while it is one of only a few species of birds to be found on the six non-ice-covered continents, it gathers in impressive numbers along the Delaware Bay in the spring, in in the ABA’s new home state of Delaware, to gorge on Horseshoe Crab eggs. It is a true bird of the world but with part of its heart in Delaware. When you think about it, that’s not a bad metaphor for our organization.

The choice of Ruddy Turnstone for Bird of the Year marks a return to the idea that our featured bird should be one that ABA members are likely to encounter with some regularity. Ruddy Turnstones are incredibly flexible, as shorebirds go, and their little railroad spike of a bill is useful not only for the namesake flipping of beach pebbles, but also probing, routing, digging, and pecking along both sandy or rocky shorelines the world over.

So yes, this is a bird that many birders, and even non-birders, are quite familiar with. But a focus on this particular shorebird does shine a light on a couple of important conservation issues.

First, Ruddy Turnstone is one of a number of shorebird species that congregates on the Delaware Bay in spring to take advantage of the Horseshoe Crab spawn. Turnstones, along with the famously threatened Red Knot, rely on this biological and gastronomical plenty to refuel on their long journey to their nesting territories in the arctic. Lightly regulated Horseshoe Crab takes in the Delaware Bay threatened populations of these migratory birds and in response New Jersey placed a moratorium on crab harvesting and Delaware restricted it only to males, two moves that have been beneficial not only to the crab populations in the bay, but to the birds that depend on them.

Second, Ruddy Turnstones exemplify threats due to climate change on both ends of their range. As arctic nesting species they, along with many other shorebirds, time their migration to reach their nesting grounds near the height of the brief arctic summer, when productivity is at its peak. If that productive period comes earlier, the birds can miss it, which in turn impact nesting success of a great suite of birds. Additionally, sea level rise threatens the beachfront habitats of Ruddy Turnstones which, despite their great flexibility, are not immune to  such potentially drastic changes.

But despite these challenges, Ruddy Turnstones are still a much beloved sight on the coasts of the ABA Area, and often inland as well. We look forward to sharing this bird with the ABA community in 2017. 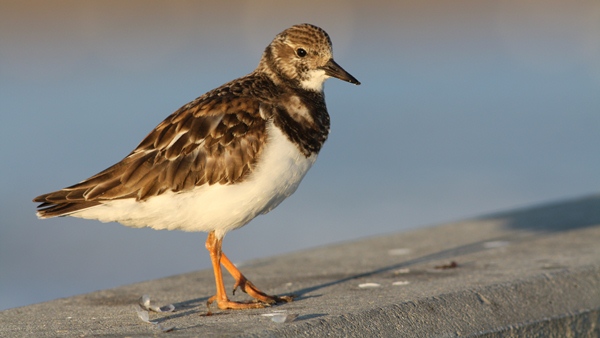 Originally designated Tringa interpres, the turnstones were quickly determined to be different than other shorebirds, at which the genus was changed to Arenaria in 1780. The scientific name is from the Latin for sand – arena – and the genus is roughly translated as “sand-dwelling”, an odd name for a bird that is as much at home on rocky coastlines as sandy beaches.